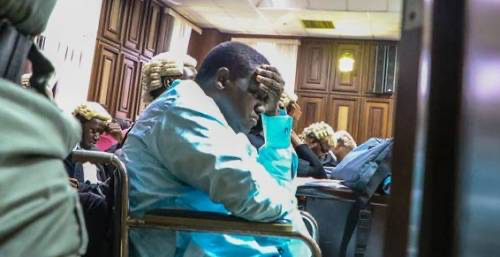 Federal High Court sitting in Abuja, presided over by Justice Okon Abang, has convicted and sentenced a former Chairman of the Pension Reform Task Team (PRTT), Abdulrasheed Maina, to 61 years in prison for money laundering.

However, the jail term, which is totalled 61 years, will run concurrently.

Maina was arraigned by the Economic and Financial Crimes Commission (EFCC) on 12 counts on October 25, 2019, for alleged money laundering and theft of pension funds running into N2 billion.

The commission alleged that Maina committed criminal offences punishable under sections 11(2) (a), 15(3), and 16(2) (c) of the Money Laundering Prohibition Act, and also acted in breach of the Advance Fee Fraud Act.

On November 26, 2019, the court granted bail to Maina in the sum of N1 billion, and ordered him to produce two sureties who must be serving senators.

The two sureties, according to the court must be prepared for N500 million bond each, and must always be in court with the defendant at each adjourned date of the trial.

He complained that the bail condition was “stringent, excessive and impracticable” and subsequently applied for variation.

On January 28, 2020, Justice Abang exercised discretion of the court judicially and judiciously reduced Maina’s bail conditions to N500 million with a serving Senator as surety.

Due to prolonged absence in court, Justice Abang on November 18, 2020 revoked Maina’s bail, and consequently ordered his rearrest anywhere within and outside Nigeria.
On November 23, 2020, the court ordered that Maina’s surety, Senator Ali Ndume should be remanded in prison following his failure to produce the defendant in court to continue his trial.