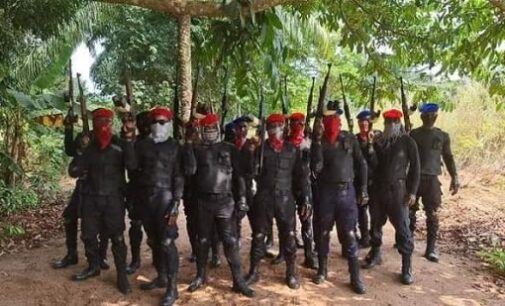 The Indigenous People of Biafra (IPOB) has alleged that some killer Fulani herdsmen were prevented from attacking some communities in Enugu on Saturday.

The group stated that while governorship election was going on in Anambra state, the assailants invaded undisclosed Enugu communities.

It, however, added that its militant wing, the Eastern Security Network (ESN) foiled the attacks.

This was revealed in a statement by the spokesman for the group, Emma Powerful, which was made available to SaharaReporters on Sunday.

In the statement titled, “While Anambra Election Was Going, On Jihadists Came to Attack Biafra Communities In Enugu But Were Repelled By ESN – IPOB,” the group vowed not to allow criminals to attack any area in the South-East.

The statement read, “We are the Indigenous People of Biafra under the command and leadership of our liberator and prophet Mazi Nnamdi Kanu. We wish to reiterate that the mandate of Eastern Security Network, ESN is to pursue fulani terrorists, bandits and killer herdsmen hiding in the bushes and forests of Biafraland.

“ESN was created to ensure these blood suckers are not allowed any breeding space in Biafra land. This security outfit has been living up to its responsibility, and Biafrans home and in the Diaspora are very proud of our gallant men and women serving in ESN.

“The enemies and their sponsors thought they could take us unawares but unfortunately for them our gallant ESN operatives keep vigil over the entire Biafra land 24 hours.

“While election in Anambra State was going on, the enemies deployed terrorists disguising as herdsmen to Enugu State to attack unsuspecting Biafrans but the vigilance of our ESN operatives paid off as these agents of death and sorrow were repelled.

“No matter how hard they try we will not allow any inch of Biafra land to be invaded by terrorists again. Never again shall ESN and IPOB allow Biafran women and girls to be raped by uncircumcised terrorists. We shall continue to defend our ancestral land no matter the price!

“We warn the sponsors of these jihadists and their foot soldiers to stop wasting their time because no part of Biafra land will be occupied by terrorists.

“We again call on the Fulani-controlled Federal Government of Nigeria to organise a referendum for Biafra people to decide on whether or not they want to continue to belong to Nigeria or have their own country. The forced marriage by Britain can no longer work.

“We assure Biafrans that ESN operatives will continue to stand on the watch tower since the hypocritical Nigerian security agents have refused to protect our people against Fulani killer squad masquerading as herdsmen.”