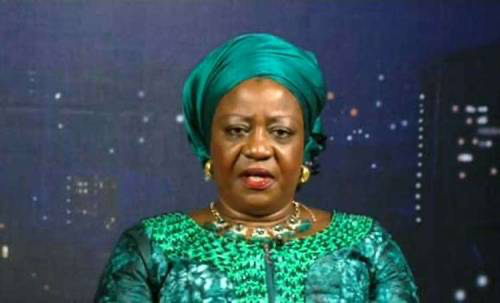 Lauretta Onochie, Personal Assistant to President Muhammadu Buhari on Social Media has stated that the alleged killing of notable and average Nigerians in the South-East region by the Indigenous People of Biafra (IPOB) is the reason its leader, Nnamdi Kanu, must face trial.

Onochie, who used obscene and offensive words to describe Kanu in an article on Sunday, gave the reaction to the clamour by civil societies, traditional, opinion and religious leaders that Kanu should be freed and that Buhari’s government should embrace negotiations.

Onochie described Kanu as a “monster” and a “lunatic,” saying, “Nigerians are waiting anxiously for justice to be done. Under President Muhammadu Buhari, a due process advocate, the monster will get a fair trial, a chance he didn’t accord those he ordered their executions. The families of the slain are waiting for a fair and just closure to their nightmares.”

Onochie added, “Well-meaning Ndigbo are of the opinion that their leadership, failed them by encouraging one of them who was clearly an unwell man. They did not speak up when they should. They are still hiding their heads in the sand.

“To call for his release, is to spit on the graves of Dr. Chike Akunyili, Dr. Lawrence Ezenwa, Dr. Ahmed Gulak, slain traditional rulers, students, virgins, and ordinary Nigerians of Igbo stock who lost their lives on the instructions of this lunatic, not forgetting the security operatives they murdered.

“President Muhammadu Buhari’s government has done more in terms of infrastructural development for Ndigbo, than any other government in recent times. But it’s not enough for them to align with his party.

“This is the time when stupidity will no longer help. At a market place, these monsters did not spare a thought for their own people who came to make a living, before engaging the might of the Federal Government in a gun battle; in a market. These people now wake up in the morning, go to a shop. Buy some biscuits and fuel. Make a recording of themselves, bragging.”

One of Buhari’s controversial aides, Onochie once deceived the Nigerian Senate, denying her membership of the ruling party, All Progressives Congress (APC), when she sought confirmation as a national commissioner of the Independent National Electoral Commission.

SaharaReporters had in July 2021 reported how Onochie was still a card-carrying member of the APC and equally participating actively in party politics.

The Senator Kabir Gaya-led Senate Committee on INEC had screened Onochie in consideration of her appointment as an INEC Commissioner, despite the public outcries.

However, a document had emerged thereafter confirming that Onochie was a registered APC member in Delta State.