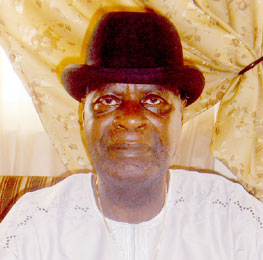 Sources say that Ehinlanwo died in Abuja on Friday shortly after he returned from the hospital.

Ehinlanwo who represented the Ondo South Senatorial District for eight years between 2003 and 2011, confessed to playing a crucial role in pushing a third-term agenda for former President Olusegun Obasanjo before the 2007 general elections.

“Ehinlanwo died at home in Abuja shortly after he returned from the hospital,” a source revealed.

In April 2012, after he had left the National Assembly, Ehinlanwo explained in an interview the reason why he brought the infamous proposal for a third term for former President Obasanjo.

“I want to confess to you as an elder statesman that I will not deny that I brought up the motion, which was supported by the majority of the members of that committee,” Ehinlawo had said.

“I was looking at the experience of government at that time and I said if we give him (Obasanjo) another term, he might be able to take this country to sail across all these bottlenecks, headaches and incoherent leadership. That was my thought then,” he had said.

He was a member of the sub-committee on the executive, which was a branch of the National Assembly Committee on the Review of the Constitution headed by then-Senator Ibrahim Mantu.

The main committee had been split into a number of sub-committees each devoted to articulating proposed amendments on the various chapters of the 1999 Constitution.

Ehinlanwo belonged to the sub-committee on the executive, which was to consider proposals relating to the executive branch of government across the three tiers.

The sub-committee was headed by Senator Omar Hambagda, who ironically had been blamed for throwing up the proposal on account of his leadership of that sub-committee.

Ehinlanwo had a Bachelor of Law degree, a barrister at law and a master’s degree in business administration.

During his lifetime, he worked as a legal practitioner, teacher, University lecturer, and banker among others.