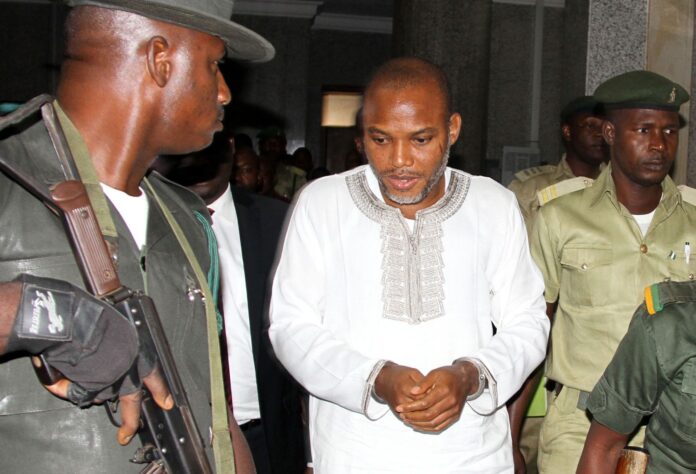 Ifeanyi Ejiofor, lead counsel for the leader of the Indigenous People of Biafra (IPOB), Nnamdi Kanu has said that IPOB is not unlawful as ruled by Justice Binta Nyako.

The lawyer further reiterated that no other court or higher one has challenged or appealed against the verdict since 2017.

He, therefore, stated that his client will get justice because he has not committed any offence against the law based on the ruling, adding that Kanu is just a political prisoner.

In June, the IPOB leader was abducted in Kenya and bundled to Nigeria to face treason charges.

He was subsequently arraigned and brought before Binta Nyako, a Judge of the Federal High Court in Abuja, who asked him to be remanded in the custody of the Department of State Services (DSS).

Ejiofor gave an update on his latest visit to Kanu in detention in a statement made available to SaharaReporters on Thursday.

While he enjoined Kanu’s supporters to continue to pray for him, he maintained that the pro-Biafra agitator is strong and unswerving in his commitment.

The statement read, “I had an extensive interaction/chat with our indefatigable client- Onyendu Mazi Nnamdi Kanu during today’s routine visit to the National Headquarters of the Department of State Services (DSS).

“The strides so far recorded on our part is seemingly impressive though may remain unnoticed to undiscerning minds, and he welcomed every strategy being adopted by our team, as well as the coordinating efforts of all lawyers participating in this case, including those in the diaspora.

“He was also briefed on the inability of the Federal Government to file a response to his Fundamental Rights Suit pending before the Umuahia High Court. An action substantially challenging among others, the unlawful but bloody invasion of his home on the 14th day of September, 2017 by the Nigerian Security Agencies.

“The Federal Government’s reason(s) for avoiding the court, though not far-fetched may not be unconnected to their inability to offer an explanation on their monstrous and bloody invasion of Onyendu Mazi Nnamdi Kanu’s residence on the 14th day of September 2017, wherein over 28 innocent civilians were murdered in cold blood by the invading Nigerian Soldiers, and properties worth billions of Naira consequently destroyed in the process.

“Thankfully, the world is paying deserving attention to the gross human rights violations as it affects our client, as well as the continued onslaught on unarmed civilians being labelled as members of IPOB.

“We are not relenting in our efforts to ensure that justice is done to our Client, he will be freed and in no distant time, because he has committed no offence known to law. He is at best, a Political Prisoner. Nevertheless, Victory will be ours in the end. I see!

“Onyendu was very much overwhelmed to receive the report on the overwhelming solidarity and unwavering support so far shown by millions of his supporters. Peaceful conduct of his fans was also relayed to him and he encouraged all and sundry to be United in one peaceful solidarity.

“We implore you all to continue to pray for him even as you remain unshaken in your support and prayers, as you have always shown within the confines of the law.

“Onyendu is very much strong in spirit and firm in his convictions. You will see him soon. We shall continue to provide regular updates as the event unfolds. Thank you all and remain blessed, Umuchineke.”