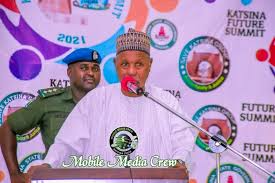 Governor Aminu Bello Masari of. Katsina State, has said that danger looms for northern children if northerners fail to wake up from their slumber.

According to Governor Masari, the lifestyle of citizens from the region coupled with the looming population explosion is bound to escalate the plight of children in the area if nothing is done urgently.

While drawing comparison with their southern counterparts, using two key demographic variables, marriage and birth rate, Masari said about 80 per cent of men in the south stick to one wife while the same percentage of men in the north marry two to four wives.

Governor Masari made the remarks while declaring open the “Katsina Future Summit” organised by a coalition of non-governmental organisations known as “Save Katsina Group” to orchestrate a dependable future for people of the state.

Similarly, according to the Governor, the average number of children a person from the south is likely to have is three while the average in the north is about nine.

Consequent upon this, Governor Masari warned that to continue walloping in the old order may worsen the living standard of people from the north, particularly children and by implication, the entire nation.

To that effect, Masari is calling on his fellow northerners to rise up to seek and apply the required knowledge to tame the menace of the looming population explosion.

“In 1987, when Katsina was created, the population was about 3.8 million. How many years today, we are talking about 8 million.

“That land of Katsina that was 500 years ago is still the same land. It has not increased in size but has increased in population.

“So, how do we conquer the situation, accommodate ourselves, our future children and grandchildren without the requisite educational knowledge?

“Gentlemen, we need to sit up. The challenges of the future with population explosion and with the character and nature of Hausa man which is totally different from the culture and traditions of our southern partners.

“What is the average age of marriage? 80% marry one wife in the south while in the North, 80% percent marry from two to four. Multiply the numbers and see for yourself.

“If we continue in this way obviously out of school children and abandoned children are going to be much more,” Governor Masari queried.

In the same vein, Masari further admonished youths to “work very hard against the menace of drugs and other intoxicants” which he said is one of the major factors fuelling banditry in the north.

“Everyone of us, we owe a debt to the society that we come from: to the villages, to the communities, to the houses, to the families and even to ourselves.

“The society belongs to all of us. Leadership is about the wisdom of the old and the energy of the youths blended together that is what makes a very good progressive, enterprising, developmental community or society.

“What is fuelling banditry in our communities? What is fuelling criminality in our communities? We must stand up against the evil criminality of drugs
From the experience we have gathered within the last six years, we have seen the role of drugs influencing some of these bad behaviours and actions to the youths. We must work very hard against the misuse of drugs and other intoxicants,” Governor Masari added

The Coordinator of Save Katsina Group in the state, Comrade Hamza Umar Saulawa speaking with Journalists at the two days summit, held at the state’s Local Government Service Commission’s Conference Hall said the summit was necessitated by the alien challenges the state is currently experiencing.

“We decided to come up with the summit after a long brainstorming discussion and identification of problems.

“You know Katsina is one of the true pillars in Nigeria when it comes to education, hospitality, peace and security.
But unfortunately, for some couple of years now, we’re at the back. That’s why we say let us all come together and identify the problems, where and how it started.”