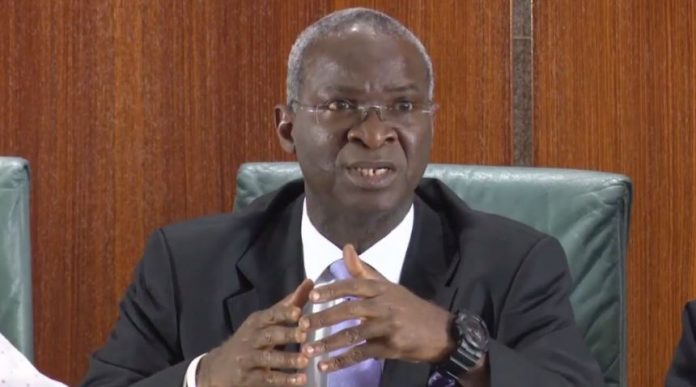 The Human Rights Writers Association of Nigeria, HURIWA has accused the Minister of works Mr Babatunde Fashola of being the ‘Devil’s Advocate’ against the person of President Muhammadu Buhari, stating that the former Lagos State Governor is attracting harsh criticisms for the president amongst the people of Southeastern Nigeria.

The popular rights group which hailed President Buhari for accepting Governor Hope Uzodinma’s invitation to commission some projects in Imo State last week called on the Nigerian leader to note that the minister of works is “clearly the Leading cabinet-level devil’s advocate against the president in South East of Nigeria going by even his recent clear marginalization of South East amongst the benefitting region to get the federal government emergency roads maintenance and rebuilding initiative announced he announced.

“We invite Mr. President to note that barely a few hours after he made a landmark statement and policy commitment on balancing the infrastructural gaps in the South East of Nigeria, the federal minister of works left out the South East of Nigeria in a huge roads repairs initiative thereby seeking to convince the 60 million Igbo speaking people of Nigeria that the current President suffers from IGBOPHOBIA”.

HURIWA, while reacting to Buhari’s speech in Imo on Thursday which said the “Igbos stand to benefit more from the ongoing development of infrastructure in the country because ‘‘they are more enterprising”, said Fashola was not truthful to the president on infrastructural development in the region.

In a statement issued and made available to DAILY POST on Wednesday, HURIWA recalled that the Works and Housing Minister had on Tuesday directed the immediate emergency repairs on failed portions of roads affected by floods in five states across the country, noting that no part of Southeast was included in the lists of roads billed for the repair.

HURIWA also listed the minister of Labour Chris Ngige as another member of President Buhari’s cabinet who has not told the President the “truth about the state of federal roads in South East of Nigeria when the minister falsely claimed that the federal road connecting Anambra through Arondizuogu has been upgraded whereas all Federal roads in Imo State are in a serious state of disrepair”.