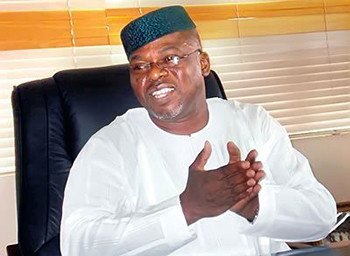 Former Governor of Ekiti State, Olusegun Adebayo Oni has purchased the Peoples Democratic Party (PDP) nomination form to contest for the party’s primaries ahead of the states’ gubernatorial election in 2022.

This was announced in an official press release, titled ‘Let’s Do It PDP: Segun Oni is Ready. Ekiti is waiting’ and signed by Hon Yemi Arokodare, member House of Rep (2003-2007).

The press release stated that the action by Segun Oni, officially validates his interest in the governorship race, to commence another journey to serve the people of Ekiti State.

It reads: ”To the glory of the Almighty God and on behalf of our Principal, Chief Olusegun Adebayo Oni, we have come to pick the Peoples Democratic Party (PDP) Nomination Form to express his firm and profound interest to contest and win the party’s primaries and emerge victorious at the governorship election in 2022.

”The message of Ekiti people to the PDP is very loud and clear ‘Segun Oni we know, Segun Oni we want, give us Segun Oni as your candidate and we will do the rest we shall use our votes to deliver and usher-in a PDP-led government in Ekiti state.

”The people of Ekiti State once tasted the administration of Chief Segun Oni (2007 – 2010), and for them, it is still the best experience in terms of a people-driven government, good governance, and open government. Chief Segun Oni is the real and practical definition of an unblemished Omoluabi that is tested and trusted. He is a rare breed of a politician whose critics and everyone testify to his honesty, decency, integrity, and charismatic leadership.

”It must be said at this point that it is only the quality of the candidate the PDP presents in Ekiti that will count and not the propaganda that the PDP can field just anyone and win. The popularity and acceptance of Chief Segun Oni in Ekiti state is very special and unique in its own way, and it is strategic to the PDP winning the governorship seat in 2022.”