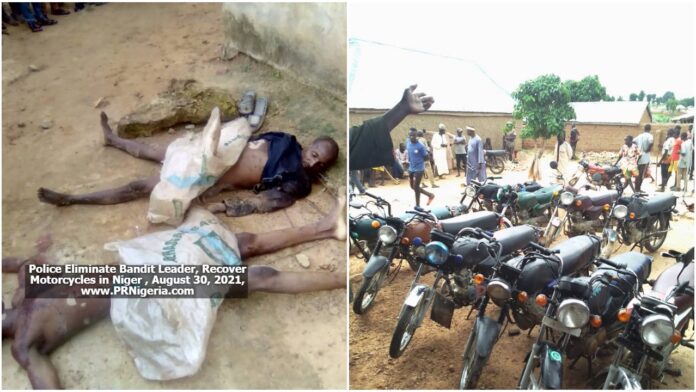 Operatives of the anti-kidnapping team of the Nigerian Police, with the support of local vigilantes, on Monday, eliminated a notorious bandits’ leader, Jauro Daji, in Niger State.

They also killed several other bandits loyal to Daji in the Kontagora axis of the State, Naija247news learnt.

Ten motorcycles were also recovered from the Bandits.

The Police, according to sources, acted on credible intelligence and ambushed the bandits, eliminating Daji, alongside his ‘boys’, who were trying to cross a stream in the bush, for a kidnapping operation at an isolated community.

Speaking to PRNigeria, one of the sources, an intelligence officer said: “It was the combined team of policemen and local vigilantes that killed Jauro Daji and score of his bandits who were on a mission to abduct innocent persons at a village.

“The notorious Jauro Daji who is suspected to be involved in attacks on villages and schools led other armed bandits in large numbers on motorcycles.

“We have recruited the services of local divers to retrieve the weapons some bandits who escaped with their corpses threw into the river.”