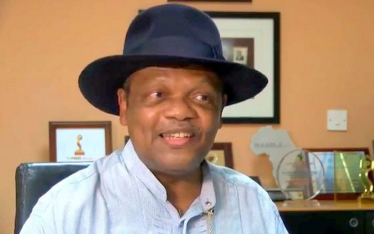 Last Sunday, the Founder of Stanbic IBTC Bank, Mr. Atedo Peterside, claimed that the Nigerian National Petroleum Corporation dipped its fingers into the federation account to announce a profit of N287bn.

Atedo in the tweet challenged the Corporation to publish details of all dividends received by it and tell Nigerians which ones it recently “diverted from the Federation.”

Peterside had said, “There is an allegation that NNPC dipped their fingers in the Federation Cookie Jar in order to announce bumper 2020 profits; they should come clean and publish details of all dividends received by them and tell us which ones they recently diverted from the Federation to themselves.”

This is not the first time Peterside will be making such unsubstantiated claims against the NNPC.

On March 21, he wrote a piece on his twitter handle where he rejected the Federal Executive Council approval of $1.5bn rehabilitation project of the Port Harcourt Refining Company Ltd.

“FG should halt $1.5bn approval for repair of Port Harcourt refinery and subject this brazen & expensive adventure to an informed national debate. Many experts prefer that this refinery is sold by BPE to core-investors with proven capacity to repair it with their own funds,” Peterside posted on his twitter handle on March 21.

On March 27, he also posted another query on his twitter handle which reads, “In 2019, PH Refinery contributed zero revenue, but incurred costs of N47bn; almost N4bn a month! Instead of ending this nightmare through a #BPE core investor sale, #NNPC wants to enmesh Nigeria into a deeper financial mess by throwing $1.5bn (incl. debt) at a problem it created?”

Peterside is an alumnus of the City University, London and the prestigious London School of Economics and Political Science, where he majored in Economics, in his first degree. He later obtained his Master’s degree in 1977, also in Economics and is certainly not a rookie when it comes to economic and financial issues.

He is a savvy entrepreneur, investment banker, economist and founder of Stanbic IBTC Bank Plc, Anap Business Jets Limited and the Atedo N. A. Peterside Foundation.

He regularly recalls some of the values he got from his stern, Ophthalmologist father, Chief Michael Clement Atowari Peterside.

“My father trained me to disbelieve first and question the message anyone was giving me and only proceed if the proposal makes sense to me,” he had said.

In effect, the real message of this peculiar paternal philosophy is – first disbelieve any message!

Perhaps, this brings to the fore, the origin of the mistrust and disbelief from Peterside of the N287bn profit which was declared last week by the Nigerian National Petroleum Corporation.

As someone who studied Economist which is an evidenced based social science discipline, and a banker of global reckoning, it was expected that Peterside should have supported his claims with proofs that could push his arguments that the N287bn profit declared by the NNPC was doubtful.

But rather than doing this, he merely shot himself in the foot by making spurious claims that was not supported by any verifiable evidence.

It is unfortunate that despite NNPC’s Monthly Financial and Operations Report including the published Audited Financial Statements for 2018 and 2019; Peterside could still claim that the Corporation took funds from the federation account in order to announce profit of N287bn.

It could be recalled that since assumption of office as the Group Managing Director of the NNPC, Mele Kyari has put in place robust operational blueprint that has reduced costs and improved profitability.

Shortly after his appointment, Kyari made clear his plans for the NNPC and these centered around operational efficiency and transparency.

“Going forward, we will seek to continuously entrench transparency, accountability, and performance excellence across all NNPC operations, and we will put the necessary structures in place to ensure compliance with these principles,” he had said.

It is a well-known fact that before Kyari’s appointment, the manner in which the corporation managed its financial activities was a subject of controversy in the public sphere.

The NNPC was mostly accused of running an opaque operation where a few but not its majority shareholders – the Nigerian public, knew its financial status.

While this had made the NNPC come across as an untrustworthy entity, it also courted and struggled in controversies of financial immodesty, poor accountability, lack of profitability and even considered broke.

Between the Nigeria Extractive Industries Initiative (NEITI) – a natural resource utilization watchdog, and the Auditor General of the Federation, dealing with the NNPC to get it to account for its financial transactions was distressing. This is because the corporation does not always open up its book for scrutiny.

But under Kyari’s Transparency, Accountability and Performance Excellence (TAPE) agenda, the era of opaqueness in managing the affairs of the NNPC has ended

Being an Economist, it was also expected that Peterside should still remember that cost minimization is a necessary condition for profit maximization in competitive markets.

This is because, if, for a given level of output, a firm does not minimize costs, it therefore means that it is also not profit maximizing.

It is instructive to state that within the first year of managing the NNPC, Kyari through his cost reduction strategy was able to reduce NNPC’s losses from N803bn in 2018 to N1.7bn in 2019 before the eventual declaration of the N287bn Net Profit in 2020.

Interestingly, this is the first time in the 44-year history of the NNPC that the Corporation will be declaring profit.

While revealing the facts behind the financial statement, Kyari gave credence to the impact the cost reduction strategy has had on the finances of the NNPC. Specifically, he said that the Corporation did not buy what was not vital to its 2020 operations.

Kyari said, “What we did to arrive at this (N287bn profit), I think it is a continuous process. Since this administration came into being in 2015, there was a very drastic change in the way we do our business.

“One is to cut cost, to be more efficient and also to ensure that this company is transparent and accountable to Nigerians and therefore it is a process that started in 2015 on the commencement of the administration of president Muhammadu Buhari who has consistently being the Minister of Petroleum Resources in 2015 till this day and the end result is that, that piloting gave us the opportunity to do things differently.

“And because it is a continuous process, when I came onboard, I learnt from what was on ground and also brought a new perspective which is to ensure that I build on what I met and to collaborate and steer the direction of the Board of Directors of this company to ensure that cost is reduced.

“The combination of all these is the result we posted. First is the reduction of the losses in 2019. It is a collective activity, collective action, but ultimately, the things that we did made it possible.”

It is also important to state that the NNPC, under the leadership of the GMD, was able to engage all its contractors and insisted on cutting costs to at least 30 per cent in the 2020 financial period.

Kyari added, “This (engagement with contractors) worked and we were able to pull down most of our procurement cost by 30 per cent.

“We saw the opportunity to be much more efficient by automating our system and processes, that made us faster, and also ultimately, it reduced so much of logistics cost that would have been an additional cost to our business. When you combine all this, and the very fact that we started borrowing at a very low rate in 2020. That was a cost reduction.”

In terms of dividend payment, it was expected that Peterside, being an investment banker of many years, should obviously have understood that dividend is usually appropriated from the Net Profit based on the decision of the Board of an organization.

It is also instructive to state that the NNPC has no direct access to federation money and besides, profit and dividend are two different issues. No dividend was declared so far until after the Board meeting and or Annual General Meeting.

So, it will be the decision of the Board of Directors to either add the N287bn profit to the capitalization of the NNPC company with the passage of the Petroleum Industry Act or declare a portion of it as dividend.

Nigerians including Peterside should wait until when all Governance process for dividend declaration are concluded.

Peterside should also encourage NNPC in their efforts for strict adherence to best practices in Corporate Governance, rather than making uninformed and unfair comments.

Being a respected statesman, and stakeholder in Nigeria’s corporate citizen, he would have simply called NNPC to understand details instead of making such assertions

Ifeanyi Onuba, a Chartered Accountant writes in from Abuja.