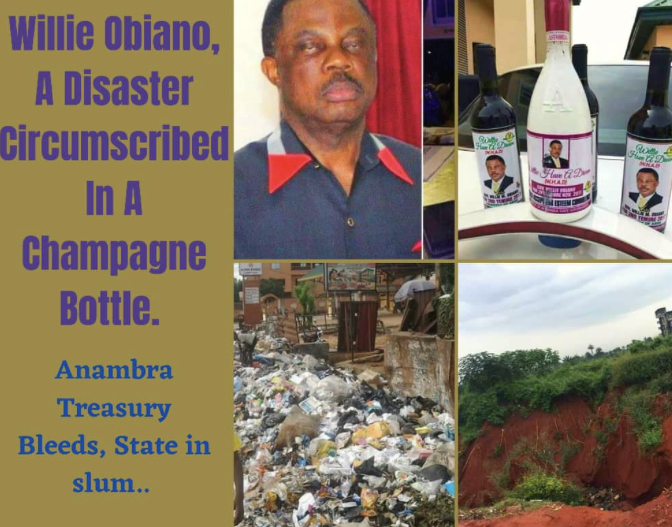 It’s sad and disheartening that a man of Willie Obiano calibre who has lived in Houston Texas America to know what development entails and instead lead Anambra state out of its Bustee when he had the opportunity of serving as Governor, turned a disaster who’s more interested in his champagne brand and frivolities; this is the same man driving Anambra State into bottomless pit with heart wrenching Debts.

Willie Obiano in his 7 Years of Governance has murdered the dream of Anambra State envisioned by both former Governors, Sen. Chris Ngige and Mr. Peter Obi who left the State debt free, but today, Anambra is bleeding profusely.

Reliable intelligence have revealed that the Governor who recently returned to the State from Abuja on Charted plane went to seal a deal of Five million US Dollars (2 Billion Naira) to buy judgement at the Court of Appeal for the embattled factional Chairman of APGA Mr. Victor Oye and consolidate the candidature of their willing tool Charles Soludo who Obiano wants to impose as successor by all means possible to cover his crime against Anambra State and gross debts profile of the State.

It was gathered that the Governor after meeting with the President of Appeal court also met with INEC National Commissioners to negotiate for the removal of the Court Order placed on Charles Soludo’s name and to quickly muscle the name into the INEC portal before October 7th` to replace that of Chukwuma Umeoji. The office of the principal secretary to the Governor sourced the money with the Manager of Fidelity Bank where the Government Account is domiciled.

The INEC negotiation for the removal of Court Order ended at four million US Dollars. This brings to a total of Nine million Dollars (3.6 Billion Naira), the amount spent on INEC and Court by the Governor to remove Hon. Chukwuma Umeoji’s name and replace it with that of Charles Soludo. Furthermore, The Governor has mandated his Attorney General to approach Chukwuma Umeoji’s Lawyers to accept 500 million Naira and abandon Umeoji’s Appeal, but It’s not clear if the money was accepted or not. It’s regrettable that tax payers money which was supposed to be used for Road Constructions and maintenance, Refuse disposal and other developments in the State is being converted to hard currencies and taken to Abuja by Rev. Father Manafa and Hon. Chinedu Obidigwe to subvert the wishes of the common Anambra man and woman, and massive bribery of Judges, INEC and Umeoji’s Lawyers.