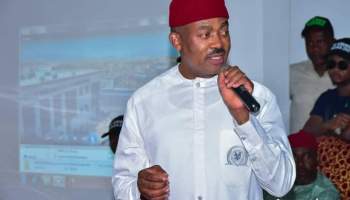 A cross section of Anambra people, have bared their minds on the forthcoming governorship election in the State, calling on governorship candidates of various parties to reveal evidence of their achievements or contributions to humanity and societal development.

Mr. Chuks Okonkwo, a businessman based in Awka stated, it is only Dr. Godwin Maduka, who has shown evidence and capacity to perform in office, as governor of Anambra State based on his antecedents and evidence of what he has done for the society.

He said “Go to Umuchukwu. There, you will Maduka’s evidence of what he has done. And that gives a clear revelation of what he will do or achieve if he is elected governor.

“He built schools, roads, courts, police and security formations, judges quarters, and to crown it all, the biggest and largest medical facility in West Africa.

“That is evidence of his capacity to provide infrastructure for Anambra State when he becomes governor.

“Where are the evidence of other candidates? What have they done either in their home place or any where in the State.

An Awka based trader, Celestine Obigbo, concurred saying the criteria to elect a new governor of Anambra State is no longer by “blowing big grammar”

Obigbo said “In Igboland, there is a saying that says “Ahunaya ekwe, which means seeing is believing.

“We have seen what Maduka has done and that shows his capacity. It is evidence of what he has done and what he can do.

“Other candidates should come and tell us what they have done before they ask us to vote for them at the governorship election.

An Onitsha resident, Mrs.Cecilia Oduka, said the time has come for those who seek to be elected into public office provide evidence or report card of their antecedents.

She said “This is the best yardstick to elect a new governor of Anambra State.

“We are fed up with big grammar and empty promises from those who seek for our votes.When they suceed,they forget all they have promised.

“What they have done, their antecedents and evidence of what they have done for the society and for the people of Anambra State, should be the yardstick to asses them before we vote for them

“Dr. Godwin Maduka has towered above all of them in this regard. There is evidence of what he has done and achieved for the society.