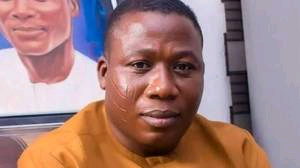 Igboho Sends Message From Detention, Identifies What His Dream Yoruba Nation Will Copy From Benin Republic
He was quoted as saying that the West African country where he’s being held hostage enjoys steady electricity supply

Yoruba activist, Sunday Adeyemo, aka Sunday Igboho has said the secession of Yoruba Nation he has been agitating for will soon be achieved.

Igboho stated this in a message sent to SaharaReporters via his spokesman, Olayomi Koiki.

Koiki said the activist asked him to thank major Yoruba leaders in the country who had shown one support or the other towards the activist in detention in Benin Republic.

He was quoted as saying that the West African country where he’s being held hostage enjoys steady electricity supply, hoping that the same will apply to the separate Yoruba Nation which will soon be actualised.

He said: “I am Olayomi Koiki, the spokesman for Chief Sunday Adeyemo (Igboho). Our father, Chief Sunday Igboho extends his greetings to all Yoruba indigenes all over the world.

“He also asked me to send my greetings to the King, Ooni of Ife, Adeyeye Ogunwusi, he said I should really appreciate you for the support, he said he can see how you’re supporting him because his wife is delivering the messages.

“He said I should also thank the Oba Tejuoso who has arrived in Benin Republic though they haven’t seen each other. He also said I should thank our father, the Olugbon.

“He said we should take a look at Benin Republic enjoying steady electricity supply. That’s what we desire in the Yoruba Nation we have been agitating for and we will get there very soon.”

Sunday Igboho was arrested alongside his wife in Cotonou, Benin Republic by security operatives in the West African country on July 19 after fleeing Nigeria to evade arrest by Nigeria’s secret police.

The Department of State Services (DSS) had declared Igboho wanted after its operatives carried out a bloody midnight raid on his residence in the Soka area of Ibadan, Oyo State.

DSS Public Relations Officer, Peter Afunnaya, had advised Igboho to turn himself in.

“Those cheering and eulogising him may appeal to or advice him to do the needful,” Afunnaya said. “He should surrender himself to the appropriate authorities. He or anyone can never be above the law.”

Igboho was later arrested in Benin Republic while trying to flee to Germany with his wife.

However, Igboho’s wife has since been released from police custody while Igboho remains in detention in the West African country.