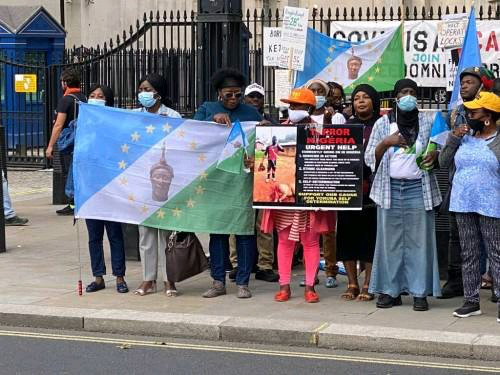 The two groups, during the Saturday protest, reiterated calls for their separate independent nations.

Yoruba Nation agitators and Biafra Agitators last weekend held a protest in the United Kingdom over the violent clampdown by Nigerian government on agitators, including their leaders.

Both Yoruba activist, Sunday Adeyemo (Igboho) and leader of the Indigenous People of Biafran, Nnamdi Kanu have been arrested.

The two groups, during the Saturday protest, reiterated calls for their separate independent nations.

They likened the continued fusion of the three major tribes in the country to that of the United Kingdom, Afghanistan and North Korea.

They were seen calling on the Prime Minister of the United Kingdom to intervene swiftly in the affairs of Nigeria so the security situation does not degenerate to what is currently experienced in Afghanistan.

“Boris Johnson, do something! Afghanistan today, Nigeria tomorrow,” they chanted.

“ISIS is already in Nigeria. Our President is a terrorist,” one of them said.

The protest comes amid the current travails of the IPOB leader who has been in the detention of the Department of State Services since June. He briefly appeared in court, blindfolded, handcuffed and chained before Justice Binta Nyako of the Federal High Court on June 29.

Operatives of DSS did not bring Kanu to court for a trial slated for July 26, and Nyako adjourned the case till October 21.

The trial of Kanu resumed last month in Abuja where he faced terrorism and treasonable felony charges among others.

The Nigerian government had said that Kanu was brought back after he jumped bail and went on the run in 2017.

His family and lawyers said he was illegally arrested in June while in Kenya, tortured, and repatriated to Nigeria.

On the other hand, Igboho was arrested at Cardinal Bernadin Gantin International Airport, Cotonou, while trying to leave the country for Germany.

The Department of State Services (DSS) on July 1 raided the residence of the activist in Ibadan, Oyo state.

Igboho had said he would be at a ”Yoruba Nation Rally” in Lagos two days after the raid.

The agency alleged that Igboho was stockpiling weapons, and subsequently declared him wanted.

He has remained in detention since his arrest in the West African country.