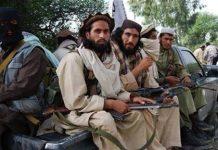 Moscow, Aug. 18, 2021 (Sputnik/Naija247news) At least two people were killed and 12 others got injured after members of the Taliban (banned in Russia) opened fire at protesters in Afghanistan’s Nangarhar province on Wednesday, a source from the local health department told Sputnik.
Earlier in the day, another source told Sputnik that the Taliban opened fire at people who protested in support of Afghanistan’s national flag.
The Nangarhar province is known for such acts.
In 2018, a suicide bombing killed at least 68 people in one of the deadliest insurgent attacks in months.
The bomber struck in a crowd of people protesting against a local police chief in Nangarhar province near Pakistan.
The death toll from the blast soared overnight.
Another 165 people were injured and local hospitals struggled to cope with the casualties.
Hundreds died in a wave of attacks elections due in October of that year.
No group said it carried out the suicide bombing in the crowd of protesters in Nangarhar’s Momand Dara district, but Islamic State militants are also active in the province.
In February 2020, two U.S. troops and an Afghan soldier were killed while nine other people were injured in an attack in the Nangarhar province.
“Reports indicate an individual in an Afghan uniform opened fire on the combined U.S. and Afghan force with a machine gun,” the then U.S. military spokesman Col Sonny Leggett said.