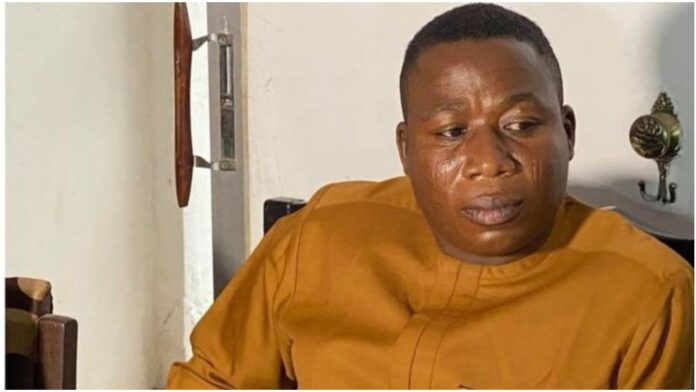 There are indications that the Federal Government is assembling critical evidence that will make the trial of Yoruba secessionist leader Sunday Igboho smooth sailing following his arrest and detention by the government of the Benin Republic.

Among the critical pieces of evidence are dozens of ‘exclusive’ videos where Igboho allegedly issued inciting statements that may aid Nigeria in filing treasonable and felony charges against self appointed Yoruba political leader.

The video clips, PRNigeria gathered, would be used by some security and intelligence agencies in prosecuting Adeyemo, popularly known as Sunday Igboho to ensure the self-acclaimed Yoruba secessionist leader is indicted in the Court.

Igboho, a Yoruba Secessionist was arrested  at an airport in the Benin Republic while fleeing Nigeria to Germany. The ‘Yoruba Nation’ lead advocate was declared wanted by the Department of State Services, DSS.

His house in Ibadan was raided during a clandestine operation by a combined team of security operatives and men of the DSS, in June.

A top-ranking operative of one of the intelligence agencies told PRNigeria that the video clips will suffice as their evidence in nailing Igboho who is yet to be extradited back to Nigeria from Cotonou, the capital of Benin before a law court.

Apart from behind the scene scheming of security agencies, the Attorney General of the Federation and the Minister of Justice, Mr. Abubakar Malami is yet to unveil the Ministry’s strategies towards the prosecution of Igboho.

The spokesperson to Justice Minister, Dr. UMar Jibrilu Gwandu told PRNigeria that “It is a legal, judicial and the discretionary issue over which the Attorney General consider the public interest and the interest of justice to decide. The Attorney General of the Federation is considering and I believe is not bound by time limitations in exercising that discretion and considering the beneficial approach.”

PRNigeria has published some of the videos which included Igboho’s threat to Kill Tinubu and other Yoruba Leaders over the Oduduwa Republic and Elections in Nigeria (https://www.youtube.com/watch?v=WHXrs3HGI0s).

There is also a video where Igboho was mocking the death of Pastor Adeboye’s son and praying to God to kill wives and children of Leaders that do not support the Yoruba Nation.

In another video, Sunday Igboho Dared Soldiers, Police, DSS operatives when they attempted to arrest him as he removed his Shirt. His followers too were shown interrogating a man they claimed they captured as a DSS Guy’ at Osogbo Yoruba Rally.

Another video shows Igboho directing his follower to forcefully open borders for smugglers with a follow-up video showing his militias invading Idiroko Border and snatching guns from Nigeria Custom Officers.

Apart from boosting of acquiring Guns and ammunition to fight security personnel, he also threatened that “if 1,000 policemen invade my house, hardly will 100 return.”

There is also a video of a live broadcast by one ‘Lady K’ when DSS stormed Igboho’s residence. The lady could be heard calling on Yoruba Odua Warriors to come to their rescue and attack the security operatives from the back.

WATCH SOME OF THE VIDEOS HERE: https://prnigeria.com/2021/07/25/security-videos-sunday-igboho/