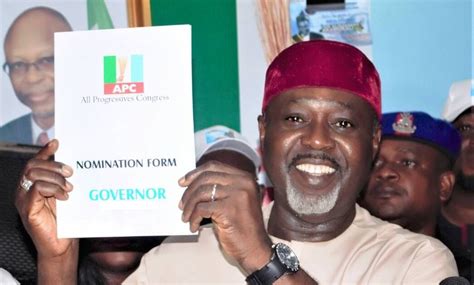 By Emmanuel Mogbede
Abuja, June 29, 2021 Dr George Moghalu, APC Anambra governorship aspirant on Tuesday in Abuja called on the partys leadership to conduct a fresh primary election in the state.
He told a news conference that the primary election conducted on June 26 by Ogun State’s Gov. Dapo Abiodun-led APC governorship election primary committee was a sham.
According to him, election did not hold in many parts of the state in the exercise which produced Sen. Andy Uba as the party’s governorship candidate.
He noted that in some locations, election materials arrived late and after voters and officials had dispersed and long past the time when it was possible to conduct even a semblance of an election.
Moghalu added that in other parts of the state neither material nor personnel arrived, stressing that elections did not hold in any voting centre.
He said it was regrettable that the partys primary election committee went ahead to produce and announce a purported results in spite of the alleged lapses.
“I call on APC’s national leadership; on all who believe in democracy and good governance and those committed to protecting electoral processes and ensuring the rule of law to act now and ensure primary elections are properly conducted,’’ he said.
He said his call became necessary to enable party members to elect a candidate of their choice to lead the party to victory in the governorship election slated for Nov 6.
He argued that the outcome of the alleged primary as announced by the primary election committee was not in the interest of the people of Anambra.
He said he was ready to support any aspirant who emerged as the party`s candidate for the election in a properly conducted primary election.
Moghalu added that he had been a member of the APC since its inception and deserved to be treated better.
“I have served the party in different capacities, always creditably and always with the highest dedication and loyalty.
“Therefore, I will do everything within my abilities and the law to ensure that the travesty orchestrated will not sand. I have appointed a legal team, and we have gathered evidence including videos and pictures.
“I will work within the appeals process of the party to present my case and I have the full expectation that the right thing will be done,’’ Moghalu said.
The News Agency of Nigeria (NAN) reports that 14 aspirants were said to have participated at the APC Anambra governorship election primary.
The aspirants were Sen. Andy Uba, Nwokafor Daniel, Dr George Moghalu, Mr Paul Orajiaka, Mr Edozie Madu and Dr Chidozie Nwankwo.
Others are Mr Maxwell Okoye, Col. Geoffrey Onyejegbu, Mr Azuka Okwuosa, Onwa Mokelu, Igwebuike Hygers, Godwin Okonkwo, Beneth Etiaba and Onunkwo Obinna.
It was not Uba’s first time of getting the governorship ticket in Anambra.
Uba won the Anambra governorship election in 2007 in a landslide victory and was sworn on May 27, 2007.
On June 14, 2007, barely two weeks and three days after being sworn in, the Supreme Court removed Uba from office on the ruling that the tenure of then incumbent, Gov. Peter Obi of APGA, had not lapsed.
The 2007 election in which Uba emerged victorious was, therefore, declared as null and void because INEC conducted it in contravention of the law, the Court said.
Uba who hails from Uga, Aguata Local Government Area in Anambra South, had since then made tenacious efforts to claim the top political job in the state.
In April 2011, he won the Senatorial election to represent his district and served for two terms.