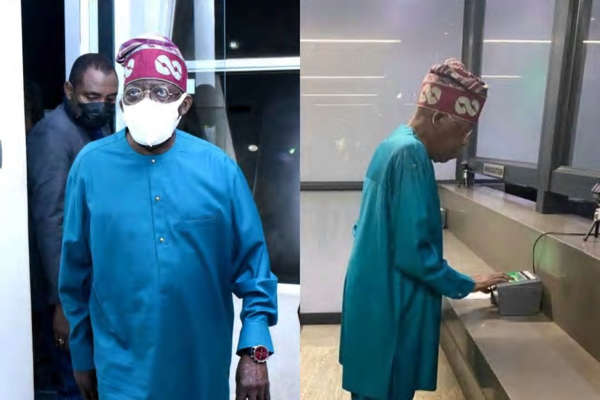 Asiwaju Bola Tinubu on Tuesday, June 15, arrived the country from Dubai after spending days in the United Arab Emirates (UAE)

President Muhammadu Buhari on Thursday, June 10, visited Lagos state to commission a rail project but Tinubu was absent
Following the rumour about his death, the national leader of the All Progressives Congress (APC), Asiwaju Bola Tinubu, arrived Lagos from Dubai on the night of Tuesday, June 15.

PM News reports that social media were awash that Tinubu was dead, but his media office denied the reports, saying that the former governor would soon arrive in the country.

Our sources gathered that Tinubu arrived Lagos hale and hearty, putting those wishing him dead to shame.

According to the report, the rumours of Tinubu’s death might have been fuelled by the domestic accident he reportedly had in his bathroom two weeks ago.

Tinubu was said to have fallen on his two kneels and sustained injuries, which necessitated his travelling to Dubai for medical attention.

Meanwhile, Legit.ng had previously reported that Nigerians expressed mixed reactions over the emergence of the pictures of Bola Tinubu, receiving the chieftain of the Peoples Democratic Party (PDP), Atiku Abubakar, at the Nnamdi Azikiwe Airport, Abuja.

It was reported that Tinubu welcomed Atiku, who was the former vice president and PDP presidential candidate during the 2019 general election, back into Nigeria on the evening of Friday, May 28.

The former Lagos state governor and Atiku are very good friends and both men were foundational members of the APC until the former defected to the opposition PDP in order to pursue his presidential ambition.

Arewa group endorses southerner to succeed Buhari in 2023
Also, the Arewa Mandate Initiative (AMI), a coalition of northern groups, declared that the north would consider certain southern politicians that would receive their support in the 2023 general elections.

The coalition said a majority of northerners are committed to the idea of rotating the presidency between the north and south.

The group made this known in Abuja on Thursday, June 3, in a statement issued by its coordinator, Muhammed Mubarak, and the secretary, Aminu Muhammed, in Abuja.

AMI also noted that consultations across numerous political groups, especially on the APC platforms in the north in the last three months have shown evidence of the commitment to ensuring that the next president of Nigeria emerged from the southern part of the country.