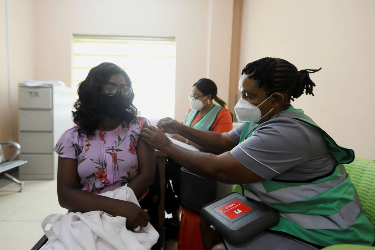 ABUJA, June 15 (Reuters) – Nigeria is expecting a second shipment of nearly 4 million doses of COVID-19 vaccines by early August, and plans to resume giving out first doses, which had been halted to save its supply for second doses.

Africa’s most population has so far given a first dose to only around 2 million of its 200 million people. Fewer than 700,000 having received a second dose.

Nigeria has been rationing 3.92 million doses it received through the COVAX global vaccine sharing programme in March, with its future supplies put in doubt by an export ban from India. The government told states in April to stop giving first doses once half of the supply was used, to ensure there would be enough for second doses.

But Faisal Shuaib, the director of the National Primary Health Care Development Agency, said that restriction was no longer necessary. Nigeria now expects a second shipment of 3.92 million doses of the AstraZeneca COVID-19 vaccine by the end of July or early August.

Vaccination centres will be reopened to adults over the age of 18 seeking first doses, he said.

“We have been inundated with requests by Nigerians to be vaccinated,” Shuaib said at a media briefing in Abuja.

He did not specify where the new doses would come from, but pointed to a commitment last week by G7 leaders to deliver at least 1 billion coronavirus vaccine doses to the world over the next year.

Like other African countries, Nigeria is struggling with a lack of supply and inadequate healthcare infrastructure for a rapid mass rollout. Vaccine hesitancy rooted in misinformation is also a problem.

The World Health Organisation (WHO) said last week that about 90% of African countries would miss a September target to vaccinate at least 10% of their populations. read more

As of Tuesday, Nigeria had 167,078 confirmed cases of COVID-19 and 2,117 deaths. Experts say those figures probably understate the extent of the outbreak, given low testing rates.