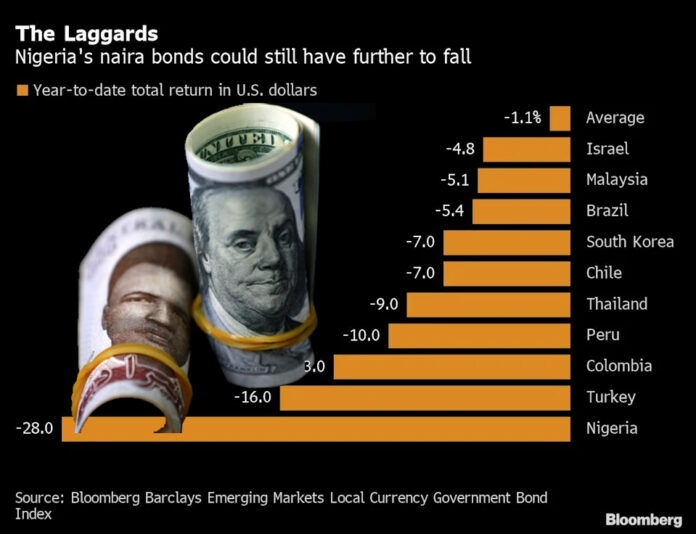 The Nigerian Treasury bill (NTB) rate closed flat on Tuesday as liquidity in the financial system improves further amidst prediction that upward yields repricing will slowdown in June.

Particularly, in the treasury bill space, investors’ were noted to have maintained the status quo on the bid and offer sides amidst renewed cautious trading after monetary policy authority held key rates.

Liquidity in the money market which closed at a surplus of N256.2 billion on Monday, further improved on Tuesday as market participant increased funding in the Standing Deposit Facility (SDF) window.

As such, there was a reduced demand by deposit money banks (DMBs) in the Standing Lending Facility (SLF) window. Consequently, the open buy back and the overnight rates declined by 50 basis points (bps) and 33bps to close the day at 12.00% and 12.67% respectively.

Treasury bill benchmark curve was flattish, closed the day at 5.78%.

“We saw some activities on the long-end of the open market operations (OMO) benchmark curve which resulted in an expansion of 5bps to close at 9.03%”, Chapel Hill Denham said.

The investment firm added that this was triggered by the re-investment of the N55.5 billion OMO maturity. However, there were bearish sentiments in the secondary bond market particularly in the extreme long-end of the curve – the Apr-2049 and Mar-2050.

This partly indicates investors wanting to exit the long end of the curve in a bid to reinvest in other attractive maturities. Overall, the bond benchmark curve contracted by 3bps to 13.25% on Tuesday.

“We expect improved liquidity to drive more activities in the long end of the OMO curve, especially as investors await the release of new NTB calendar”, analysts said.

On the fixed income market outlook, investment analysts at Atlass Portfolio Limited said as the inflation rate began to take a decline, they expect the yields in the fixed income space will slow down in the month of June.