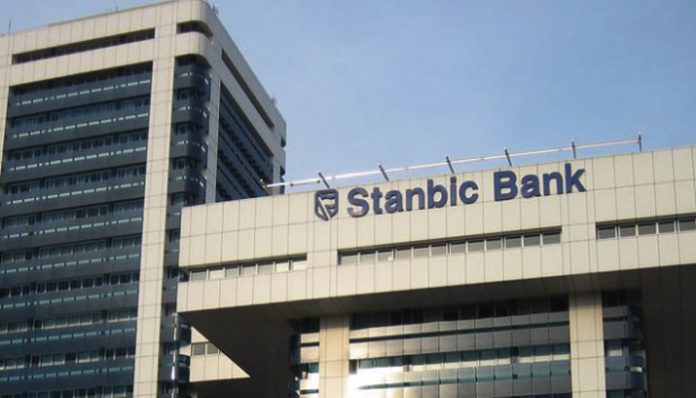 Investment analysts at CardinalStone Partners Limited have lowered Stanbic IBTC to hold rating, saying the financial service group has a narrow scope for earnings growth in 2021.

The group’s low earnings outlook as projected caused analysts to slash expected profit before tax to N85.6 billion from N108.12 billion previously estimated. This came right along with a cut in the target price for the stock.

Equity analysts dropped down on Stanbic IBTC’s price target to N50.28 per share, from N58.55. In the Nigerian Exchange, the bank’s stock steady at N46 per share in the last 7-trading session amidst the stock market rout.

In 2020, the group’s pretax profit printed at N94.72 billion. However, analysts explained that there are certain changes that will impacts earnings growth in 2021.

In a rather surprising move, Stanbic IBTC announced a dividend per share of N3.6, together with a 1 for 6 scrip bonus, this brings the total yield to 23.6%.

Despite a generous payout, CardinalStone sees limited scope for significant earnings growth and projects a further drop in return on equity to 18.3% in 2021 from 24.4% in 2020.

While the recent onboarding of the life insurance business appears positive for earnings diversification, analysts said they expect the impact to be muted in 2021. The investment firm noted that the banks’ capital market business, which has been a mainstay for the bottom line, could be hit by weaker trading revenue due to a jump in yields on fixed income instruments.

The estimation was supported by the fact that key upside risks continue to grow in the wealth business which has been partly supported by the Pension Fund Administrators (PFA) transfer window.

‘The management noted to us that the bank has been a net gainer since the inception of the window’, analysts at CardinalStone explained. It was also noted that the Stanbic IBTC grew its retail footprint which could potentially support earnings in the mid-term.

In 2020, Stanbic IBTC gross earnings increased 0.3% to N234.4 billion amid the extremely harsh operating environment. In the period, interest income fell 12.3% year on year to N105.8 billion, exerting pressure on asset yields, according to analysts at United Capital’s equity report.

Interestingly, before and after tax profits jumped 4.2% and 10.9% to N94.7 billion and N83.2 billion, respectively. United Capital said increased gross earning was supported by a 43.4% growth in trading income.

Stanbic’s strong presence in the Asset & Wealth Management, Pensions, and Capital market space, came in handy amid volatility in the yield and currency market environment, analysts at United Capital said.

In the period, asset management fees accounted for 62.6% of fee & commission income, recording 11.0% jump to N47.0 billion. In line with developments in the macro space, interest expense fell 25.9% amid a repricing of deposits.

As such, cost of funds improved from 3.9% to 2.9%. Also, impairment charges rose sharply to N9.9 billion from N1.6 billion write back in the prior year. Analysts at United Capital said in their report that this is unsurprising given the weak macro environment.

In the same vein, the group cost of risk came in at 1.6% for the period while the cost-to-income ratio slowed to 47.4% from 50.4% in 2019. However, operating expenses growth was muted, up 0.3% year on year to settle at N94.3 billion, management guided that the increase in operating expenses was due to the inflation-linked salary adjustment made during the year.

Overall, pre and post tax profit improved by 4.2% and 10.9% to N94.7bn and N83.2 billion, respectively in the period despite the pandemic-induced economic pressures on businesses.

From the balance sheet perspective, it recorded 32.5% growth in total assets to N2.5 trillion driven by a surge in cash & cash equivalents, deposits, and trading liabilities. Total net loans and advances expanded by 18.3%, compared to a 49.5% jump in total deposits.

Analysts said the muted increase in NPL stems from the reclassification of two major loans in the books of the corporate and investment banking business. According to United Capital, the sectors involved are Oil and Gas downstream as well as the construction and real estate sector.

Analyzing the business segments, the result for the Personal and Business Banking (PBB) or retail banking was rather disappointing, United Capital analysts said. They noted that despite benefitting from low-interest expense, the segment declared a loss after tax of N9.6 billion in 2020 as its cost to income ratio climbed to 116.6%.

In terms of asset quality, analysts said the business segment has the highest level of non-performing loans at 5.0%, at par with the regulatory minimum. On the other hand, the wealth Business which includes Asset Management, Pensions, Trusteeship, and Insurance remains impressive.

The segment’s revenue increased 3.0% to N52.1 billion while its profit before tax jumped 9.0% to N35.7 billion, thus accounted for 37.7% of the group’s total pretax profit in 2020. It was also noted that Stanbic IBTC’s non -interest income grew by about 10%, on account of a 20.0% growth in asset under management (AUM) despite a reduction in Retirement Savings Account (RSA) management fees.