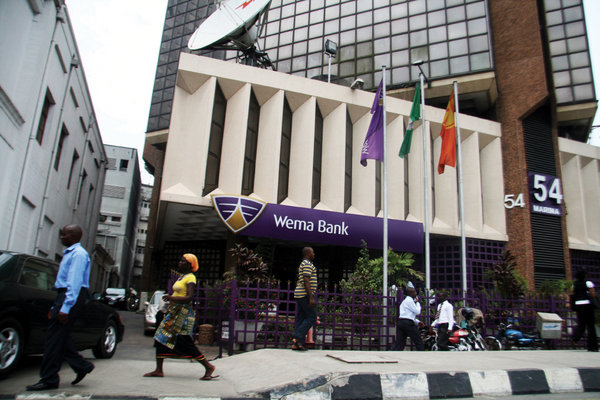 Fitch Ratings – London – 28 May 2021: Fitch Ratings has affirmed Wema Bank PLC’s Long-Term Issuer Default Rating (IDR) at ‘B-‘ and removed it from Rating Watch Negative (RWN). The Outlook is Stable. A full list of rating actions is detailed below.

The removal of the RWN on Wema’s IDRs, Viability Rating (VR) and National Ratings reflects Fitch’s expectation that, having recently received shareholder approval, plans for a significant rights issue in 3Q21 will likely proceed as intended and improve capitalisation and leverage to more acceptable levels. It also reflects our view that loan and asset growth will evolve at a slower pace than in recent years and near-term risks to the bank’s financial profile from the economic fallout of the pandemic have receded.

The Stable Outlook on Wema’s Long-Term IDR reflects our view that the current rating has sufficient headroom to absorb moderate shocks from sustained downside risks to the operating environment over the next 12-18 months.

The IDRs and National Ratings of Wema are driven by its standalone creditworthiness, as expressed by its ‘b-‘ VR. The VR considers the concentration of the bank’s activities within Nigeria’s challenging operating environment, a small franchise, high credit concentrations and a weak funding profile. It also considers easing pressures on asset quality and profitability from the economic fallout of the pandemic and our expectation of a material improvement in capitalisation and leverage following the rights issue.

Capitalisation and leverage have weakened significantly in recent years as a result of an aggressive growth strategy, with the tangible leverage ratio declining to 4% at end-1Q21 from 7.6% at end-2017, which is weaker than peers’. Wema’s Fitch Core Capital (FCC) ratio (14.4% at end-1Q21) is broadly in line with peers’ but is considered in view of the bank’s particularly low risk-weight density (27% at end-1Q21). Wema’s capital adequacy ratio (CAR; 14.8% at end-1Q21), which is supported by Tier 2-qualifying subordinated debt, is comfortably above the 10% minimum requirement for a bank with a national license.

The removal of the RWN mainly reflects our view that the large rights issue planned for 3Q21 will likely proceed as intended and will significantly improve the tangible leverage ratio to over 7%, which is more consistent with peers’. This follows the recent approval of the resolution to raise additional capital at the annual general meeting, commitment from the largest shareholders to participate in the rights issue, and the commencement of the regulatory approval process.

Although the overwhelming majority of customers are making principal repayments following the expiry of most debt relief measures at end-1Q21, loan quality remains under pressure as a high percentage of gross loans (46% on a cumulative basis at end-1Q21) have been restructured since the start of the pandemic. Specific coverage of impaired loans (38% at end-1Q21) is fairly low due to continued recovery expectations and sound coverage by collateral.

Single-borrower concentration is significantly higher than peers’, with the 20-largest customer exposures equivalent to 39% of gross loans and 4.1x FCC at end-2020. However, exposure to the problematic oil and gas sector is lower, representing 17% of gross loans or 165% of FCC at end-2020, and exposure to the riskier upstream segment is limited. Foreign-currency lending (11% of gross loans at end-2020) is also distinctly lower than peers’, which results in less exposure to foreign currency shortage and naira devaluation risks. Our asset-quality assessment also considers substantial non-loan assets (64% of total assets at end-1Q21) that largely comprise Nigeria sovereign (B/Stable) fixed-income securities and cash reserves at the Central Bank of Nigeria (CBN).

Profitability metrics tend to be considerably lower than those of larger peers, with operating returns on risk-weighted assets averaging 2.1% over the past four years, due to weaker net interest margins (NIMs) and a high cost-to-income ratio. Weaker NIMs are explained by a greater reliance on more expensive term-deposit funding, whereas the high cost-to-income ratio is a function of weak revenue generation, investments in marketing and digitisation, and high regulatory costs applicable to all Nigerian banks.

Operating returns on risk-weighted assets declined to 1.7% in 2020 from 2.6% in 2019, largely reflecting a material reduction in trading income from the high levels experienced in 2019. Wema’s NIM remained broadly stable (5.9% in 2020), with the fall in sovereign fixed-income yields and increased cash reserves at the CBN being offset by a material decline in cost of funding. Loan impairment charges, which equalled 1.2% of average gross loans in 2020, were fairly contained as a result of strong collateral underpinning newly-classified impaired loans. Operating returns on risk-weighted assets recovered to 2.2% in 1Q21 as a result of a significant decline in loan impairment charges.

Wema’s National Ratings reflect the bank’s creditworthiness relative to that of other issuers in Nigeria. They are at the lower end of the Nigerian national scale, primarily reflecting Wema’s small franchise, constrained profitability, adequate leverage following the rights issue and a weak funding profile.

Factors that could, individually or collectively, lead to negative rating action/downgrade:

– Wema’s ratings will likely be downgraded if the rights issue does not proceed as intended and its high leverage does not return to acceptable levels in line with peers’. The ratings may also be downgraded if loan and asset growth evolve at a notably faster pace than projected and exert material pressure on capital and leverage ratios to the extent that they return to current levels despite the rights issue.

– Wema’s impaired loans ratio increases significantly to above 10% due to the crystallisation of high credit concentration risks, resulting in considerable bottom-line losses and erosion of capital buffers, to the extent that its FCC ratio declines to around 12%-14% for a sustained period.

Factors that could, individually or collectively, lead to a positive rating action/upgrade:

– Upside to the ratings is unlikely at present and would require a material improvement in operating conditions.