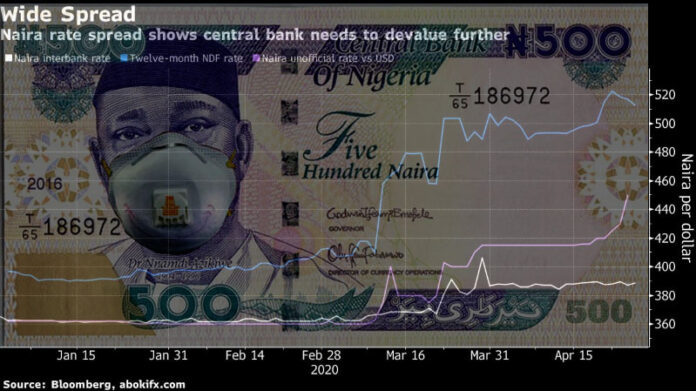 In the currencies market, Chapel Hill Denham said the Nigerian local currency, naira gained in the investors and Exporters window by 0.12% or 12kobo on while in the parallel market, it shed 1.62% or N1.62.

The investment firm however said the decline in the parallel market is linked to arbitrage activities in which traders are creating artificial scarcity of the United States dollar in reaction to the convergence of the official and NAFEX rate on the CBN website.

Recalled that the Central Bank in a move to unify its multi-tiered exchange rates removed official rate from its website and place NAFEX rate instead.

The apex move sparked reactions among local currency arbitrageur that have been enjoying wide spread between official and parallel market rates.

Some analysts have maintained that naira is overvalued and the CBN needs to make a big devaluation call on the local currency.

Due to uncertainties around the local currency, foreign investment inflow has been on decline, unfortunately remittance from Nigerian in diaspora dropped strongly in 2020.

Oil prices have been largely stable in the global market, but Nigeria production volume was reduced, as noted by National Bureau of Statistics in its gross domestic product report for Q1.

The apex bank’s intervention at the Investors and Exporters window remains below the pre-pandemic period, and despite that there is an obvious pressure on the external reserves.

IMF had asked the CBN to unify its multi-tiered exchange rates as pre-condition for accessing the remaining $1.5 billion loans until market reality forced the rates unification on the monetary policy authority.

Especially, at the time when the nation’s macroeconomic condition appeared very weak, combining high inflation, interest and unemployment rate amidst lack of policy strategy to diversify the nation’s earnings. .