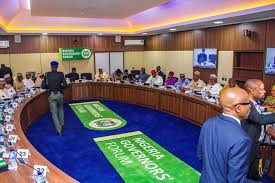 May 20 – Nigeria’s governors have called for a full deregulation of the country’s downstream oil sector so that pump price floats with global oil prices, as the West African nation cannot sustain a subsidy regime to keep fuel price stable, they said.

Kaduna state’s governor, Nasir el-Rufai, said at a meeting to discuss appropriate pricing for the petrol in Nigeria that an estimated 70 billion-210 billion naira ($170.6-$512 million) was spent every month to keep petrol at 162 naira per litre.

El-Rufai called the situation “unsustainable” in a statement issued by the Nigeria’s Governors’ Forum late on Wednesday.

ADVERTISEMENT
Nigeria deregulated its downstream oil sector a year ago, after the COVID-19 pandemic triggered a collapse in the global price of oil, its main export.

That ended a system of fuel subsidies that had helped keep the lid on simmering social unrest for decades. But state oil firm, the Nigerian National Petroleum Corporation (NNPC) picked up the tab after the government made it the country’s sole petrol importer.

However, rising oil prices since last year have increased the cost of petrol imports, stoking inflation and creating some social unrest, issues that the government needs to agree with labour unions prior to increasing pump price.

The government announced last year that petrol prices will move with the market and eliminate subsidies but said it would maintain control through a pricing mechanism.

In March, NNPC said it is spending between 100 billion-120 billion naira a month on petrol subsidies for consumers, a burden that is becoming untenable.

Nigeria, Africa’s top oil exporter, has made producing its own fuel a priority for years but efforts to revamp its refineries have failed, leaving it almost entirely reliant on imports. ($1 = 410.3000 naira)