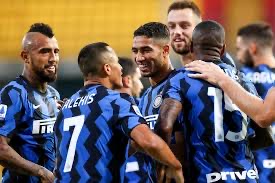 Berlin, May 1, 2021 Christian Eriksen and Achraf Hakimi put Inter Milan on the brink of securing the 2020/2021 Italian Serie A title with second-half goals in a 2-0 victory at Crotone.

The runaway leaders had been frustrated against a relegated side who are bottom of the table.

But this was until Eriksen struck just a few minutes after coming on midway through the second half on Saturday.

Romelu Lukaku struck the woodwork and had a goal ruled out, while Lautaro Martinez hit the post.

But Eriksen opened the scoring with a deflected drive and Hakimi sealed all three points with the last kick of the game.

Victory at Stadio Ezio Scida ensured the Nerazzurri will end an 11-year wait to win a Scudetto if second-placed Atalanta fail to win at Sassuolo on Sunday.

Adam Ounas forced a save from Samir Handanovic and Stefano Sensi’s shot deflected wide at the other end in a frantic start.

Sensi was denied by Alex Cordaz from a tight angle when the midfielder was presented with another early opportunity.
He later whipped in a corner-kick which Lukaku headed against the post.

Martinez’s right-footed strike rattled off the inside of the post.

Also, Cordaz palmed away another effort from Sensi as the Nerazzurri somehow failed to open the scoring in the first half.

Battling Crotone got everyone behind the ball in what resembled a training exercise, with Inter Milan continuing to probe after the break.

Sensi’s scuffed strike was gathered by Cordaz after his free-kick struck the wall.

Antonio Conte made a triple substitution after 65 minutes and Eriksen made just the impact he was hoping for soon after coming on.

Lukaku showed great strength before laying the ball off to the Denmark midfielder, whose right-footed drive from around 20 yards out deflected into the corner of the net.

Leading goalscorer Lukaku had a goal disallowed for offside seven minutes from time but Hakimi put the icing on the cake with a second goal right at the end.

He finished off a counter-attack with a clinical finish.