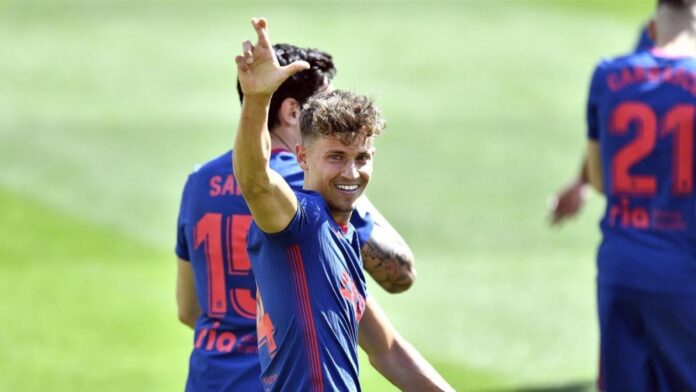 Barcelona, May 1, 2021 (dpa) Atletico Madrid earned a 1-0 win at Elche on Saturday to move provisionally five points clear at the top of the Spanish La Liga with four games remaining.
Diego Simeone’s side survived a late penalty kick, missed by Fidel Chaves, as they battle for their first league title since 2014.
Atletico Madrid striker Luis Suarez came close in the opening stages and then the Uruguayan had a goal ruled out for a narrow offside.
Marcos Llorente fired the Rojiblancos ahead in the 23rd minute with his 12th league goal of the season from Yannick Carrasco’s cross.
Suarez had another ruled out for offside early in the second half as his team continued to dominate the game.
In the 90th minute Llorente turned villain when he handled the ball inside his own area and handed Elche a penalty kick.
However, Fidel Chaves fired it against the post to hand Llorente and Atletico Madrid a reprieve, while Elche are 18th and still in the relegation zone.
“We got the three points and that gives us a lot of strength for what is to come,” said Llorente.
“We’re always positive and there’s not a long way to go anymore. We have to give everything.”
Later Saturday Real Madrid, who are second, welcome Osasuna as they bid to cut Atletico Madrid’s lead back to two points, while third-placed FC Barcelona visit Valencia on Sunday.
Earlier, Kike Garcia scored a hat-trick as Eibar beat Alaves 3-0 to retain some slim hope of survival.
The Basque side are bottom and four points from safety, while Alaves, 16th, are only a point above the drop zone.