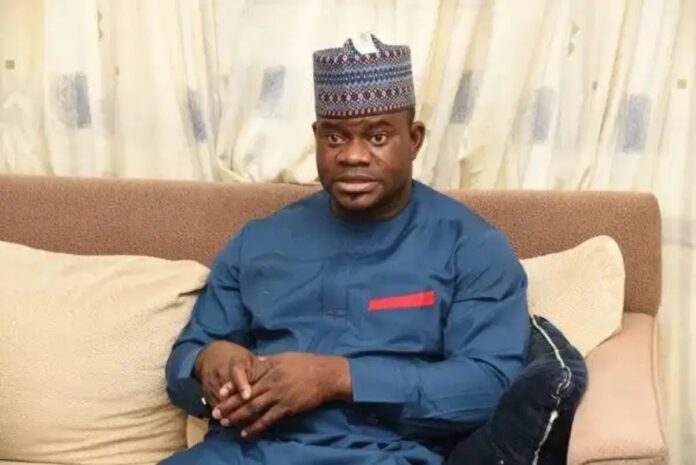 By Friday Idachaba
Lokoja, April 28, 2021 Gov. Yahaya Bello of Kogi has commended President Muhammadu Buhari for making the Hydroelectric Power Producing Areas Development Commission (HYPADEC) functional, 11 years after the promulgation of the Act establishing the commission.
Bello gave the commendation on Wednesday, at Government House, Lokoja, when the Governing Council and management of the commission paid him a courtesy visit.
HYPADEC is specifically charged with the responsibility of managing the ecological menace, to operation of dams; and for related matters,.
“I want to first and foremost appreciate President, Muhammadu Buhari for giving effect to and by ensuring HYPADEC takes off smoothly under his leadership.
“Even though HYPADEC has been in existence, it was on paper for 11 years now”, Bello told his visitors, through his Deputy, Chief Edward Onoja.
He congratulated the chairman of the Governing Council, his members, the Managing Director and the entire management staff for their nomination, appointment and confirmation.
“Believing that you are the foundation of HYPADEC for the Nigerian nation, especially Kogi, Kwara, Kebbi, Niger Benue and Plateau States, there is no doubt that with this collection of brains, intellect and experience, you will give a sound footing to HYPADEC for the benefit of all Nigerians”, Bello said.
He noted that the menace of flooding and how it was affecting the states’ agricultural activities, which is the mainstay of their economies, cannot be overemphasised.
Speaking earlier, Mr Joseph Ityav, Chairman of the Governing Council of HYPADEC, said the commission was saddled with the responsibility of formulating policies and guidelines for the development of hydroelectric power projects in communities devastated by effects of the location of dams.
Ityav said the commission was also mandated to implement projects and programmes that would improve the living standards of host communities, in addition to tackling ecological challenges arising from over-flooding of the dams “year in year out.”
“Your excellency our visit here is not only just to familiarise with you but to give you assurances that with the establishment of of this commission, the challenges and most of the difficulties, the people of Kogi State who live around where the hydroelectric power dams are located, are solved.”
Also speaking, Mr Abubakar -Sadiq Yelwa, Managing Director of HYPADEC, said that the Act establishing the commission was signed into law in October, 2010.
“You can see that from 2010 to January 15, 2021 is a long time. Within those 11 years a lot could have been achieved.
“But we thank God that He has given us people with initiatives, people with high spirits, people whose own people matter to them much like Gov. Yahaya Bello”, Yelwa said.
The News Agency of Nigeria (NAN) reports that the HYPADEC team was also at the Palace of Maigari of Lokoja, Alhaji Muhammadu Kabir Maikarfi III, to intimate the traditional ruler on the activities of the commission.
NAN recalls that President Buhari forwarded to the Senate for confirmation, his nominees as Chairman and Members of the Governing Council of Hydroelectric Power Producing Areas Development Commission (HYPADEC) on 12th November, 2020.
The Senate confirmed the nominees to the Governing Council in December, 2020.
Those confirmed include: Hon Ityav Joseph Tarfa (Benue), Chairman; Mal. Abubakar Sadiq Yelwa (Kebbi), Managing Director; Alh. Isa Ozi Salami (Kogi), Member; Engr. Taoheed Daud Toyin (Kwara), Member; Hon. Mikail Al-Amin Bamitosahi (Niger), Member.
Others are; Dr. Saleh Mohammed Galadima Kanam (Plateau), Member; Engr. Aminu Mohamed Ganda (Sokoto), Member; and Chief (Barr.) Utum Ubi Eteng (Cross River), Member.