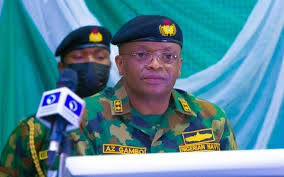 By Sumaila Ogbaje
Abuja, April 27, 2021 The Chief of Naval Staff (CNS), Vice- Adm. Awwal Gambo, has urged the Defence Space Administration (DSA) to support military operations with relevant space and cyber solutions that will act as force multipliers.
Gambo made the call during the inauguration of the DSA Canteen and send forth for posted out officers on Tuesday in Abuja.
He urged the administration to interface with the Navy’s Maritime Domain Awareness assets, for mutual benefit, promising to support DSA in the regard in any way possible.
“The Defence Headquarters (DHQ) and the services are counting on you, most especially the Nigerian Navy is counting on DSA to support military operations with relevant space and cyber solutions that will act as force multipliers.
“I enjoin you to interface with the Navy’s Maritime Domain Awareness assets, for our mutual benefit and I promise to support DSA in this regard in any way possible,” he said.
The CNS, who is DSA’s immediate past Director of Procurement, commended the Chief of Defence Administration, Rear Adm. Williams Kayoda, for his foresight to continue the improvement of the infrastructures of the organisation.
He said that the inauguration of the canteen was commendable, adding that as immediate past Director of Procurement, the staff canteen was part of the projects that bore his footprint.
According to him, it is a vital addition to the infrastructural assets of the DSA and will greatly enhance staff welfare.
The naval chief also lauded the administration for the decision to send forth officers that had served there in the past, adding that the gesture was an indication of the military solidarity that existed in DSA.
He commended the officers and staff of DSA for their contribution towards meeting the mandate of the administration.
Earlier, the immediate past CDSA, retired Maj.-Gen. Emmanuel Whyte, said the canteen was a demonstration of DSA’s resolve to improve staff welfare and enhance productivity.
Whyte, however, charged the officers and staff of DSA to show more hard work, diligence and discipline towards actualising the mandate as set out in the National Space Policy and Programme 2001.
He said that Nigeria’s security dynamics implied that efforts must be doubled to provide the military with the needed support to defeat the multiple threats against the national security.
“We must remain resolute, patriotic, positively contributing to the task of nation building,” he said.
Also the current CDSA, Rear Adm. Kayoda, said the staff canteen was part of the effort to sustain the tempo of infrastructure delivery in DSA.
Kayoda said that plans were ongoing to operationalise the Defence Space School in Delta, Defence Space Communication Satellite Centre (DSCSC) in Ado-Ekiti and other projects.
According to him, the projects when completed, will greatly enhance the capacity to support armed forces and other security agencies with relevant space products and solutions necessary for the conduct of operations in peace and wartime.
He said the event was organised to appreciate their former staff who had meritoriously served their tenures in DSA but were not formally sent forth.
“A number of former staff are now holding key strategic appointments with the former Director of Procurement, Vice-Adm. Awwal Gambo, assuming office as the 21st indigenous Chief of Naval Staff,” he said.