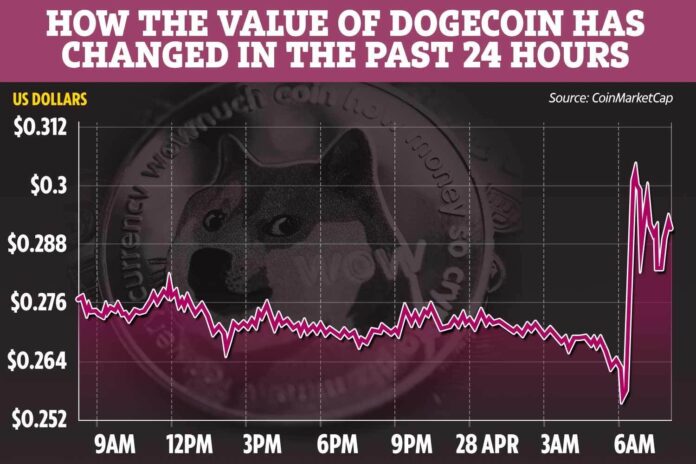 Dogecoin’s price has soared 20% in the last 24 hours to 32 cents, according to data from Coin Metrics.

Elon Musk and Mark Cuban have both made tweets supporting the meme-inspired cryptocurrency.

But its wild surge has led to warnings from some investors who view it as a speculative bubble.

LONDON — Dogecoin skyrocketed on Wednesday after receiving some celebrity endorsements on Twitter.

Dogecoin’s price has soared 20% in the last 24 hours to 32 cents, according to data from Coin Metrics. The meme-inspired cryptocurrency hit a record high above 45 cents earlier this month, sparking fears of a potential bubble in the crypto market.

Initially started as a joke back in 2013, dogecoin is now the sixth-largest digital coin with a total market value of almost $42 billion, according to CoinGecko. It takes its name and branding from the

“Doge” meme, which depicts a Shiba Inu dog alongside nonsensical phrases in a multicolored text.

It has often spiked in price following tweets from Elon Musk. The billionaire Tesla CEO once called dogecoin his “fav” cryptocurrency and “the people’s crypto.” Musk is also a supporter of bitcoin, with his electric car company having amassed nearly $2.5 billion worth of the cryptocurrency.

On Wednesday, Musk simply tweeted: “The Dogefather SNL May 8.” This is both a reference to his frequent tweets about dogecoin — which he claims are “just meant to be jokes” — and Musk’s planned appearance on Saturday Night Live next week.

But Musk hasn’t been the only one tweeting about dogecoin. Mark Cuban, the owner of basketball team Dallas Mavericks, has made several posts about the meme-based token this week.

On Monday, the billionaire entrepreneur and TV personality said his NBA team was on track to complete 6,000 dogecoin transactions in April.

“Doge is the one coin that people actually use for transactions,” Cuban said, when asked by a user why he was backing dogecoin. “People spend their Doge and that means more businesses will start taking it.”

Dogecoin has attracted a following among retail traders using the stock trading app Robinhood, which also has a crypto feature.

Fans of the token have been requesting that Robinhood introduce a feature that would let them withdraw their holdings of various cryptocurrencies. On Tuesday, Robinhood’s co-CEO Vlad Tenev said they were working on such a function.

“We’re working on deposits and withdrawals!” Tenev tweeted. “Not just for DOGE, but for all coins on Robinhood Crypto.”

However, Dogecoin’s wild surge has led to warnings from some investors who view it as a speculative bubble. The digital currency is “a classic example of greater fool theory at play,” David Kimberley, an analyst at U.K. investing app Freetrade, told CNBC earlier this month.

“People are buying the cryptocurrency, not because they think it has any meaningful value, but because they hope others will pile in, push the price up, and then they can sell off and make a quick buck,” Kimberley said.

But, he added, “when everyone is doing this, the bubble eventually has to burst and you’re going to be left shortchanged if you don’t get out in time. And it’s almost impossible to say when that’s going to happen.”

There are economists who still view bitcoin as a bubble, despite claims from bulls that the digital currency market has matured significantly over the past three years. However, unlike bitcoin, dogecoin doesn’t have a hard supply cap, meaning in theory that an unlimited amount can be minted.