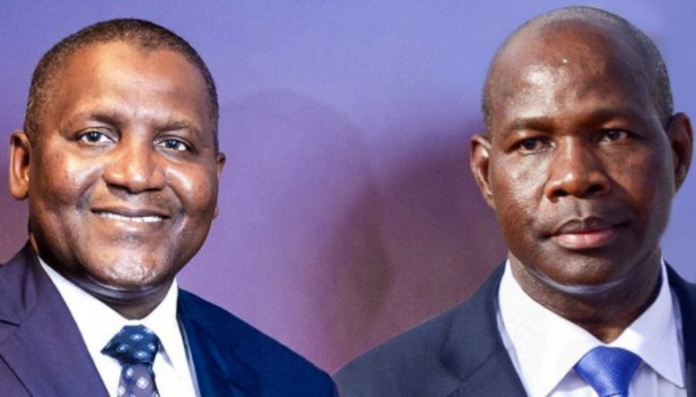 After the successful development of industrial activities at Cim Métal Group, CEO Inoussa Kanazoé is now tackling the Togolese market. He intends to make his move in a sector dominated by the imposing figure of the Nigerian tycoon Aliko Dangote.

In September 2020, Cim Métal Group’s discreet CEO Inoussa Kanazoé started marketing cement from its Togolese subsidiary. Already active in Burkina Faso with CimFaso and Cimasso, as well as in Côte d’Ivoire with CimIvoire, Kanazoé does not intend to stop there.

The establishment of the Lomé plant with a capacity of 2.5m tonnes of cement – representing an investment of 65bn CFA francs ($125m) – marks a further step taken by the businessman in manufacturing cement and consumer products (rice, sugar, oil, etc.), which helped him make his first mark in the sector. The project was made possible due to technology from the German manufacturer Gebr. Pfeiffer.

The Banque Ouest-Africaine de Développement (BOAD) contributed 25bn CFA francs to the investment in Togo. In just a few short years, Kanazoé has become a player in the West African cement industry thanks to investments in Burkina Faso and Côte d’Ivoire estimated at more than 200bn CFA francs.

Under the banner of the Cimenterie de la Côte Ouest-Africaine (Cimco), this new investment in the Togolese market is a part of Kanazoé’s ambitious regional plans. He also plans to mobilise 110bn CFA francs, 60bn of which will be devoted to installing a new cement plant in Bamako.

Cimco is in competition with its peers in Lomé, starting with Cimtogo, a subsidiary of the German group Heidelberg Cement, the Indian company West African Cement (WACEM) and, above all, the Nigerian giant Dangote Cement.

“We are so small, and yet we are going up against Dangote,” says an executive of Cim Métal Group, which is not very forthcoming about its strategy in Togo. Strengthened by the achievements of its Plan National de Développement, the country has been able to encourage new investment.

“This explains the steps that have been taken by leading economic operators on a continental scale, such as Kanazoe, to launch the construction of a state-of-the-art unit in Lomé,” says Essam Daoud, president of the Association des Cimentiers de Côte d’Ivoire as well as the head of CimIvoire.

Togo, a playground for cement companies

Cim Métal Group‘s project comes as Dangote, accused by its competitors Heidelberg and WACEM of undercutting prices in the Togolese market, has announced its intention to invest in a cement plant in the country. The plant was the subject of an investment agreement with the government in November 2019.

Alongside a phosphate mega-project, Nigerian tycoon Aliko Dangote has been injecting $60m into a 1.5m tonne cement plant in Lomé since last year. Its annual production would be enough to supply the local market’s current demand. The plant will be supplied with clinker – an ingredient for cement, of which Heidelberg is the sole local producer – from Nigeria.

The German company Heidelberg, which spent $30m to expand its factory in Lomé, is also in the midst of a major development plan in Togo that began in 2017. Its 250,000tn crushing and packaging plant was built in Awandjelo, near Kara, the main city in the north of the country, for 7.5bn CFA francs.

The group spent $250m on a clinker plant in 2014. With a capacity of 1.5m tonnes, this plant – one of the largest industrial investments ever made in Togo – is fully integrated. It has limestone and clay quarries to supply the raw materials for clinker.

While competition in Burkina Faso promises to be tough due to overproduction – an estimated at 6.7m tonnes is produced per annum, compared to demand of around 3m – Cim Métal Group should be able to use synergies between its units to maintain profitability “within an extremely unfavourable international context following the increase in raw material and freight prices,” according to a sector insider.

The apparent upturn in the sector, which has given rise to numerous investments in recent years in a number of countries in the region, is being put to the test by significant overcapacity.

In Côte d’Ivoire, the situation is stark: there are 12 operational plants that have the capacity to produce around 15m tonnes per annum. For 2019, Ivorian demand was estimated at 5.5m tonnes.