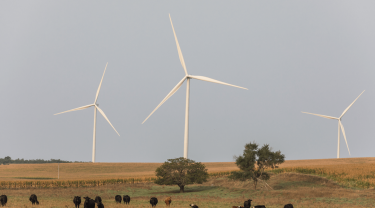 The Federal Government (FG) on Thursday said it is set to commission the 10 Megawatts to wind farm sited at Lambar Rimi area of Katsina State.

The project, which commenced in 2005 when the late Umaru Musa Yar’adua was governor of the state before it was taken over by the Federal Government in 2007.

The Minister of Power, Engr Sale Mamman who announced the development via a tweet said the project is set for commissioning later in the month.
He listed components of the project to include engineering, procurement, construction and installation of 37 Nos GEVMP (275KW) wind turbine generators, Step-up Transformers for each turbine 315KVA/33KV/400V, SCADA system (for data collection, performance monitoring, control and supervision), installation of 2× 7.5MWA transformer and accessories as well as two years operation and maintenance spare parts.

“The Administration of President Buhari is committed to the completion of abandoned infrastructure projects.
“The 10MW Katsina wind farm project set for commissioning later this month has 37 up and functioning turbines, part of our effort towards investing in renewable energy,” he wrote.

Its commissioning was scheduled for 2012 but it never happened. It also got millions of naira in annual budgetary allocations from the government with no expenditure details.