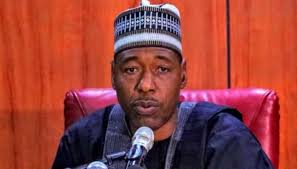 By Yakubu Uba
Maiduguri, March 9, 2021 Borno Government is to expend over N2 billion in the construction of a modern motor park in Maiduguri metropolis, in fulfilment of a campaign promise, Gov. Babagana Zulum has announced.

He made this known on Monday, in Maiduguri, at the foundation lying ceremony of the park located along Bama road.

Zulum said the old park, situated not too far from the modern park, would make way for a mega secondary school project and its occupants relocated to the modern park.

In his remarks, the Commissioner of Commerce, Alhaji Yerima Kareto, said 10 contractors were involved and had been paid mobilization fees of 15 per cent for the project, expected to be completed in 18 months