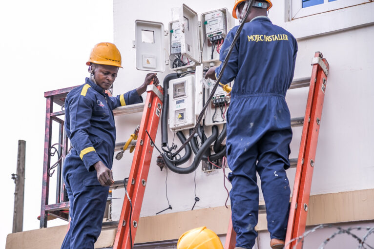 Port Harcourt, Jan. 21, 2020 No fewer than 77,000 prepayment meters are currently being distributed to customers in four states, the Port Harcourt Electricity Distribution Company (PHED) has said .

The states are Akwa Ibom, Bayelsa, Cross River and Rivers.

Mrs Ngozi Koroye, PHED’s Head of Administration disclosed this in an interview with newsmen in Port Harcourt on Thursday.

According to Koroye, the mass metering is part of the National Mass Metering Programme (NMMP) initiated by the Federal Government on Nov. 1, 2020.

“The NMMP initiative is an intervention scheme, geared toward covering the metering gap nationwide.

“In accordance with the Federal Government schedule on the distribution, the first batch of meters numbering 77,000 is allocated to PHED.

“The meters are currently being distributed and installed in PHED’s franchise area in accordance with work plans agreed with National Electricity Regulatory Commission (NERC),” she said.

Koroye, however, said that distribution companies were awaiting further directives from NERC regarding the cost implication for the exercise.

She explained that NMMP initiative was different from the Meter Asset Provider (MAP) metering scheme launched on Aug. 1, 2019.

“MAP, which runs concurrently with the NMMP, is operated by independent entities licensed by NERC to provide metering services, including meter procurement, supply, installation, maintenance and replacement.

“Under MAP, customers can purchase their meters by either making upfront payment or by installments with an amortization plan.

“Such customers are metered within 10 working days from the date of payment,” she explained.