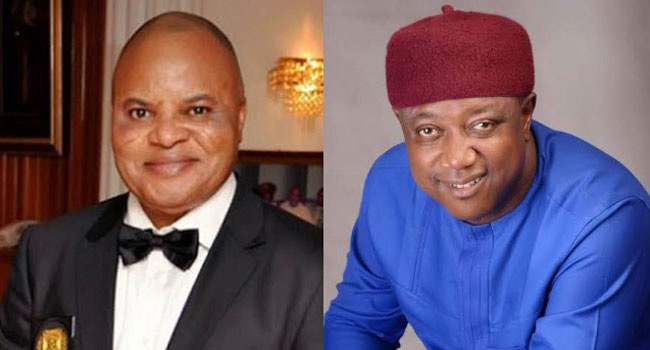 By Victor Nwachukwu
Okigwe (Imo), Dec. 6, 2020 Candidate of the All Progressive Grand Alliance (APGA) in the Imo North senatorial by-election, Mr Charles Onyirimba, has urged contestants in the election to exhibit the spirit of sportsmanship during counting of ballots.

Onyirimba said this while addressing newsmen after casting his vote in his country home at Umueze II, Ehime Mbano Local Government Area (LGA) of Imo.

The APGA candidate who described Saturday’s election as free and fair said that only a spirit of brotherliness was capable of fostering unity among individuals from varying political divides.

He urged candidates and their supporters to accept the outcome of the election in good faith and seek redress in the event of dissatisfaction through legal means.

He further stressed the value of unity and peaceful coexistence above political affiliations as, according to him, good governance and democratic dividends do not thrive in an atmosphere of disunity.

“I’ve cast my vote and I’ve gone round too. It is evident that the entire process has been free and fair.

“I, therefore, urge our people to have faith in the process, eschew rancour, and embrace unity.

“Our people are yearning for transparent leadership, quality representation and unity of purpose. Any with reservations can approach the court to seek legal redress,” he said.

He, however, said that the transmission of results through the Independent National Electoral Commission ( INEC)’s portal for onward collation was a welcome development that would further ensure transparency.

He called on the Commission not to succumb to pressure from any quarters while commending the relocation of the collation centre to Owerri, the capital city.