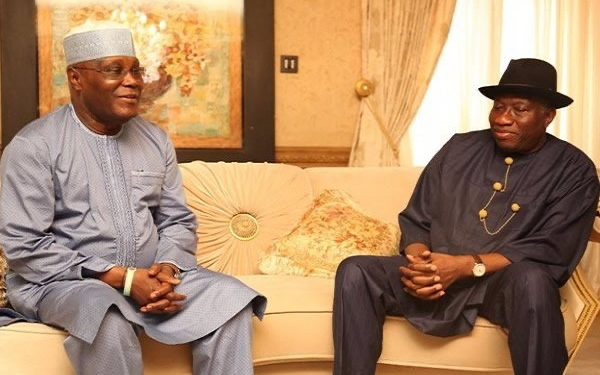 Some governors elected on the platform of the Peoples Democratic Party (PDP) are initiating series of meetings with party stalwarts, including former President Goodluck Jonathan and former Vice President Atiku Abubakar, with a view to thrashing out the issue of the party’s 2023 presidential ticket.

The initiative is coming amidst growing agitation among PDP chieftains across the country for and against the zoning of the party’s presidential ticket.

The governors’ decision to approach concerned stakeholders for clarifications and suggestions, The Nation gathered, may not be unconnected with recent reservations expressed by prominent PDP leaders, especially from the southern part of the country, over what they described as the unsatisfactory handling of the matter by the leadership of the party.

Sources said the governors decided to seek a quick resolution of the matter before it sets the party on fire.

The PDP governors were said to have been alarmed during a recent meeting at the manner in which the Prince Uche Secondus-led National Working Committee (NWC) and other organs of the party were handling the issue of zoning.

While some of the governors are of the opinion that the issue should be frontally addressed and resolved once and for all, others favour the current situation where the party keeps everyone guessing.

Said one source: “The meeting, an impromptu one held after Governor Dave Umahi of Ebonyi State left the party for the ruling All Progressives Congress (APC), was heated.

“Many of the state helmsmen blamed Umahi’s defection on the foot-dragging by the party on the zoning issue.

“They feared that more governors and other prominent PDP leaders, especially in the south, may leave the party. But many of their northern counterparts felt otherwise and cautioned against a decision yet on the matter.

“One major matter that came up at the meeting was that zoning the presidential ticket to a particular zone may also force some prominent chieftains with presidential ambitions out of the party.

“Thus, governors in this school of thought appreciated Secondus’ seeming lack of readiness to be categorical on the issue. Specifically, a northern governor cautioned against any move that would deny any party member the chance to seek the ticket.

“But pro-zoning governors insisted on the need for the PDP to respect its unwritten formula on rotational presidency, saying it is the turn of the south to rule the country come 2023.

“The governors parted without taking a decision on the matter at the meeting, and I can tell you that this has polarised the governors further.

“Party leaders and chieftains are worried about the development and not a few of our governors have been discussing it.”

Another source said some governors, after another parley, decided to approach Jonathan and Atiku as well as Governors Aminu Tambuwal of Sokoto State and Nyesom Wike of Rivers State, former Kano State governor Rabiu Musa Kwakwanso, among others, to get their positions on the zoning debate.

The source said: “During the meeting, it became obvious that the rumoured presidential ambitions of some chieftains of the party may be informing the inability of the leadership of the PDP to take a position on the zoning debate.

“This informed the decision of some concerned governors to meet those being touted to be eyeing the presidential tickets of the PDP in 2023.

“The idea is to remind them of the rotational presidency and get their position on whether it should be jettisoned or applied in 2023.

“It will not do anybody or the party any good if we all continue to point fingers in assumption.

“Names are being dropped on a daily basis and the party and our leaders are being divided more and more.

“Nobody, not even the leadership of the party, is making effort to set the records straight and avoid postponing the evil day until a time when it will be too late to make amends.

“It is better to ask questions and get to know how serious the disagreement is once and for all.

“If we identify the disagreement and understand it early enough, we may be able to find a meeting point and save the house from collapsing.

“The issue of zoning is not something that can be wished away; it can only be discussed and agreed upon. And time is of great essence.

“The talk now is not about endorsing or rejecting anybody. It is largely about understanding why it is difficult for us to agree on which part of the country should produce our next presidential flag bearer.”

Our source added that the proposed parley is necessary ahead of the much awaited elective convention of the party where national officers are expected to be elected.

“Beyond the issue of presidential ticket, there is also the debate over what should become of the current NWC, especially the national chairman.

“Don’t forget that the PDP has a tradition of also rotating that position alongside the presidential ticket,” the source said.