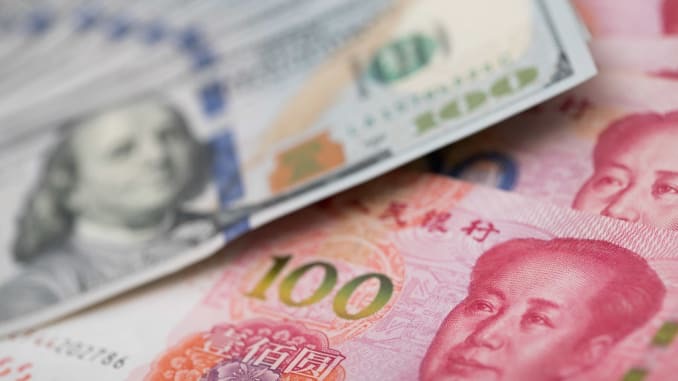 The Chinese yuan has “a long way” to go before challenging the U.S. dollar’s status as a reserve currency, says Independent Strategy’s David Roche.

Roche said it is “very, very difficult” to dethrone the dollar’s status as a reserve currency.

He also pointed out that the U.S. economy has been shrinking in the last 20 years, “yet the dollar is an increasing proportion of the settlement of international trade.”

SINGAPORE — The Chinese yuan has “a long way” to go before it comes anywhere close to challenging the U.S. dollar’s status as a reserve currency.

That’s according to David Roche, president and global strategist at Independent Strategy.

“Dethroning the dollar — which the euro tried to do, and settled at a miserable 18-20% of all the international things that go on — is very, very difficult,” Roche told CNBC’s “Squawk Box Asia” on Monday.

A number of “almost abstract” conditions, including not having too much leverage in the system as well as the rule of law, need to be met before a currency can achieve reserve status, the strategist said.

He added that the Chinese yuan is “a long way from achieving that.”

“There is a certain amount of illusion at the moment that the (yuan) — which accounts for 2% of international trade settlements and even less if you come to financial investment flows — that this can take over,” Roche said.

He was also skeptical about arguments that the People’s Bank of China’s digital currency will be the “magic potion” that allows the greenback to be knocked off its position as the world’s reserve currency.

The digital yuan is part of China’s push toward becoming a cashless society and is issued and controlled by the country’s central bank.

Such a phenomenon is going to happen, though it will take a “very, very long time,” Roche said: “Don’t be in a rush to play on that particular theme because I think the dollar is gonna sit there for a while yet.”