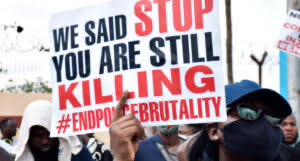 Awka, Oct. 22, 2020 The Human Rights, Liberty Access and Peace Defenders’ Foundation (HURIDE) has condemned the coordinated jailbreak in two Benin prisons in Edo and wanton destruction of lives and properties by suspected hoodlums who infiltrated the #EndSARS protesters.

Mr Dede Uzor, Chairman of the HURIDE, made this known in a statement in Awka on Thursday.

”Troublemakers under the cover of #EndSARS protesters broke into the prison in Benin and set 130 convicts serving different life sentences.

“The actions of these youths, are highly reprehensible , despicable, strange, evil and against the #EndSARS peaceful protest throughout the country.

”Some of these youths also burnt down different police stations and killed unarmed police officers and civilians”, he said .

Uzor said that security operatives should immediately arrest these unlawful elements and bring them to justice and arrest police officers who killed civilians during their peaceful protest throughout the country.

“The youths should concentrate purely on reformation,-restructuring, employment, engagement of the youths among other basic infrastructural requirements in line with our statutory constitutional provisions.

“We further urge the President, Muhammadu Buhari, to immediately constitute a special commission of inquiry to look into the budgetary allocations of the Police since the advent of democracy in 1999,especially in the area of welfare and well-being of police officers throughout the country.

“The panel, should also look at the decaying state of the barracks, police vehicles and the issue of funding, uniforms, among other things,” he said.