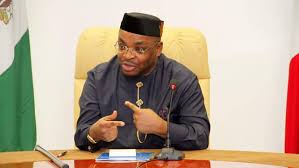 By Isaiah Eka
Uyo, Oct. 21, 2020 Gov. Udom Emmanuel of Akwa Ibom on Wednesday in Uyo inaugurated an eight-member Judicial Panel of Inquiry to investigate incidences of police brutality in the state.

Inaugurating the committee, Emmanuel said that the panel was part of efforts to meet the demands of the protesting youths for a reform of the Nigeria Police.

The governor cautioned against politicising or hijacking the protests, advising that the people should not exhibit any disposition capable of causing conflagration in any part of the country.

He urged those concerned to submit their memorandum to the panel and promised to forward recommendations of the panel to appropriate authorities.

The Representative of the State Attorney General, Mr Mfon Edemekong, would serve as the Secretary of the panel.

Other members of the panel are drawn from youth organisation, students, Civil Society Organisations and the National Human Rights Commission.

The panel is expected to submit its report within three months.

Naija247news reports that the setting up of the Panel was in line with the directive by the National Economic Council presided over by the Vice President, Prof. Yemi Osinbajo to state governors.

The panel will investigate complaints of police brutality with a view to delivering justice for all victims of the dissolved Special Anti-Robbery Squad (SARS) and other police units.

The panel will receive and investigate complaints of police brutality, human rights violation and related extrajudicial killings; evaluate evidence presented and draw conclusions as to the validity of the complaints.

The panel will recommend compensation and other remedial measures, where appropriate.