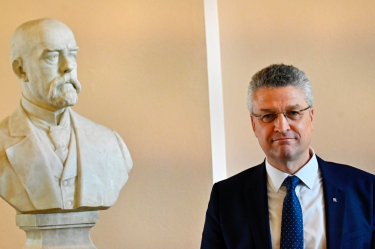 At the turn of the 20th century, epidemics of trypanosomiasis, or “sleeping sickness” as it is more commonly known, started to appear across Africa. A vector-borne parasitic disease causing apathy, slow movement, speech disorders, physical weakness and death, sleeping sickness raised alarm among European colonisers on the continent who feared that its spread could slow down the African workforce, and subsequently their colonial projects.

In 1906, a renowned German scientist travelled to East Africa with his wife and assistants to try and find a “cure” for the disease. He set up a sleeping sick “concentration camp” for East Africans, and started to “treat” them with Atoxyl – a reagent containing arsenic – even though it was known to cause pain, blindness and even death.

That scientist’s name was Robert Koch.
Today, Koch’s legacy lives on across Germany. The city of Berlin is full of plaques, monuments, and statues bearing his name and praising his medical accomplishments. The German federal agency responsible for disease control and prevention, which is currently leading the country’s response to the COVID-19 pandemic, is also named after Koch.

Best known for his research on cholera and tuberculosis, Koch is considered to be the founder of modern microbiology and one of the finest scientists of the late 19th and early 20th centuries. He received the Nobel Prize for Physiology or Medicine in 1905 for his research on tuberculosis and gained international acclaim for his discoveries. His four postulates, used to establish a causative relationship between a microbe and a disease, are taught in high school biology lessons to this day, solidifying young students’ understanding of disease, infection, and environment.

Today, while Koch’s discoveries and accomplishments are well known and highly celebrated in Germany and across the world, his expedition to East Africa rarely gets a mention. At the time of writing this article, even on Wikipedia, where his early life, education and career are discussed in detail, there is no mention of his work in Africa. There is no question that Koch designed, set up, and personally ran medical concentration camps in East Africa, causing immeasurable suffering and pain for thousands of people. So why are his colonial endeavours being ignored in modern conversations about his legacy?

Koch’s advocates might argue that his notable contributions to the field of biology outweigh his brief expedition to East Africa. However, the influence Koch had on colonial Africa was not limited to the few years he spent on the continent. Moreover, his decision to conduct on African people medical experiments that were deemed too dangerous for Europeans had overreaching consequences that influence the way the Western scientific community treats Africans to this day.

When sleeping sickness struck Africa over a century ago, the disease was poorly understood. While its dangers were well known, both in Europe and in Africa, little could be done to prevent its spread.

Nevertheless, scientists in Germany came up with several remedies that they believed could be effective against sleeping sickness, as well as other illnesses widespread in Europe, such as syphilis. They tested these remedies on animals, but growing suspicions about medical experiments on humans in Europe meant these concoctions could not be tried on German test subjects. In Africa, however, there was no comparable public resistance, and colonial authorities cared little about the impact such experiments could have on Africans.

So when Koch embarked on his expedition to East Africa, his main task was to test these remedies – many of them containing poisonous substances like arsenic – on humans. It is hard to determine whether Koch’s primary concern was to cure East Africans suffering from this horrible disease or to use them as guinea pigs to ascertain the efficiency of remedies that can also be used in the treatment of other illnesses widely affecting Europeans.

Was Robert Koch a racist willing to conduct dangerous experiments on Black people for the benefit of Germany or a canny scientist who took risks to heal the sick?

We may never know the definitive answer to this question. What we do know, however, is that regardless of his intentions, Koch’s actions directly contributed to the colonial oppression of African people.

After arriving in East Africa, Koch established the Bugula sleeping sickness research camp and started “treating” up to 1,000 people a day with Atoxyl and other untested reagents. As historian Manuela Bauche explains, it is unclear how this many locals ended up in Koch’s camp, and whether they were informed of the likely effects the toxic “treatments” would have on their bodies.

Koch’s experiences and experiments in the Bugula camp set the standard for combating sleeping sickness in Germany’s African colonies. Not only did Atoxyl establish itself as the standard drug in the treatment of sleeping sickness, but Koch’s proposal to establish many more “concentration camps” – the name he himself gave to these facilities – to isolate the sick from the healthy and continue human experimentations, were taken to heart by German authorities.

By the time Koch left the continent in October 1907, three sleeping sick “concentration camps” had been established in German East Africa, and five such institutions were found in the German West African colonies, that is, present-day Togo and Cameroon.

In these camps, as Wolfgang U Eckart explains in his research paper, The Colony as Laboratory: German Sleeping Sickness Campaigns in German East Africa, thousands of Africans became the objects of dangerous therapeutical and pharmacological research. Scientists running the camps routinely gave different doses of Atoxyl to their “patients” and monitored the side effects they experienced. According to Pittsburg University historian Mary K Webel, at the Bugula camp established by Koch himself, test subjects were made to wear wooden identification tags around their necks or wrists and subjected to a series of dehumanising assessments. Their eyes, ears, and limbs were regularly punctured with needles in an effort to extract what scientists called Krankenmaterial, or “sick material”, from their bodies. The data collected in these camps was eventually shared with British officials, who were also trying to tackle sleeping sickness outbreaks in their colonies.

Faced with a deadly epidemic that could devastate the labour force and crash the economy, Koch and his contemporaries embarked on a quest to find a cure or at least a method to contain the spread of the disease. By choosing to conduct experiments that they deemed too dangerous for European populations on Africans, they created and sustained racial hierarchies of experimentation. In light of the international race to find a vaccine for COVID-19, these are issues that we should be wary of today.

In April 2020, two French doctors suggested in a TV show that a potential vaccine for coronavirus should first be tested on people in Africa.

“It may be provocative,” said Jean-Paul Mira, head of the intensive care unit at the Cochin Hospital in Paris. “Should we not do this study in Africa where there are no masks, no treatment or intensive care, a little bit like it’s been done for certain AIDS studies, where among prostitutes, we try things, because we know that they are highly exposed and don’t protect themselves?”

His comments caused an uproar, and led many to publicly challenge the idea that “Africa is a testing lab for Europe”.

The French doctors’ suggestion, however, did not come out of the blue. Over a century ago, when faced with a deadly novel disease, European colonial officials did not think twice before using Africans as test subjects, without seeking their acquiescence or informing them of the risks.

Koch was a brilliant scientist, and he likely genuinely wanted to cure sleeping sickness and improve the health and lives of those who suffered from the illness. Nevertheless, the methods he used to try and find a cure and the conditions he set up to contain the disease were rooted in colonial hierarchies. He not only poisoned thousands of people but also contributed to the widespread acceptance of the idea that, when it comes to medical ethics, different rules apply to Africa and Europe. As we continue to search for a vaccine or potential cure for the novel coronavirus, it is important to take heed from the dark chapters of the past, so that Africa is no longer a living laboratory for western scientists.

The views expressed in this article are the author’s own and do not necessarily reflect Naija247news’ editorial stance.

Edna Bonhomme
Edna Bonhomme is a writer and historian of science based in Berlin, Germany.
Bonhomme’s work interrogates the archaeology of (post)colonial science, embodiment, and surveillance. A central question of her work asks: what makes people sick. As a researcher, she answers this question by exploring the spaces and modalities of care and toxicity that shape the possibility for repair. Using testimony and materiality, she creates sonic and counter-archives for the African diaspora in hopes that it can be used to construct diasporic futures. Her practices troubles how people perceive modern plagues and how they try to escape from them. Bonhomme earned her PhD in History from Princeton University in 2017. She is a Postdoctoral Fellow at the Max Planck Institute for the History of Science and currently lives in Berlin, Germany. She has written for Africa is a country, Mada Masr, The Baffler, The Nation, and other publications.