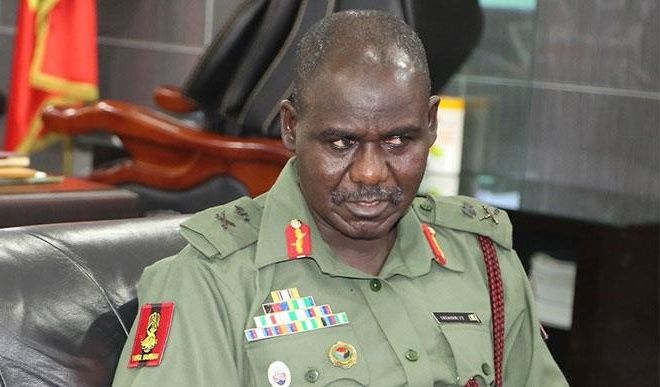 Maiduguri, Oct. 6, 2020 As part of efforts to tackle the prevailing security challenges confronting the country, the Nigerian Army has taken delivery of more sophisticated platforms and war equipment for its operations.

Buratai stated that while some of the platforms were procured from foreign sources, some were sourced locally through local ingenuity and collaborations.

“To this end, the Nigerian army recently took delivery of key platforms to reinvigorate our operations.

“These include the VT4 and FT1 tanks, the KIA light tactical vehicles as well as the SH2 and SH5 self-propel artillery guns.

“Post treatment training is ongoing on this equipment and they would soon be inducted into the theatre.

“The Nigerian Army received some armoured personnel carrier from Jordan and we are expecting the delivery of other major capabilities.

“Furthermore, through local ingenuity, Nigerian Army facilitated the production and delivery of the pro-force MRAPs, Ezugwu MRAPS as well as the Conqueror and Champion barriers.

“Despite teething challenges in the new innovation, these platforms have no doubt enhanced the effectiveness of our troops across various theatres.

“We will continue to work assiduously to ensure that we support all operations with equipment and platforms,’’ he said.

Buratai however, urged the commanders to ensure judicious deployment of the assets in order to justify the huge resources expended on them by the Federal Government.

He said the ongoing operations in different parts of the country to curtail the activities of criminals had witnessed tremendous successes.

The COAS said the military had done well in curtailing the activities of insurgents, armed bandits, kidnappers and cattle rustlers, as well as farmer-herder clashes and other crimes.

He urged the field commanders to sustain the tempo of operation to ensure the total decimation of all the inimical forces across the country.

According to Buratai, the Nigerian Army had done well in operation Lafiya Dole and the recently launched operation Sahel Sanity in the North West to rid the Katsina, Zamfara, corridors of marauding bandits.

“Similarly, operation Hadarim Daji is very active in other parts of the 8 Division area of operation in order to curb incessant farmers and herders’ clashes.

“Also, since its establishment with headquarters in Doma, the 4 Special Forces Commend in conjunction with the Guards Brigade has conducted impactful operations in Nasarawa State.

“I am happy to observe that the various operations are currently achieving the desired objectives,’’ he said.
Buratai, while paying tribute to fallen officers and soldiers, said that the army had put in place elaborate housing programme for the families of the killed-in-action personnel.

He also assured that comprehensive medical treatment for all wounded personnel would always be accorded the highest priority.

Buratai said the ongoing construction of the Nigerian Army Reference Hospital in Maiduguri and Abakiliki are just a few of several measures in this regard.

The Army chief commended the media and public for their understanding and positive change of perception regarding the Nigerian Army, adding that the media remained a powerful force in ensuring a progressive society.

He also emphasised the need for enhanced collaboration in tackling security challenges through positive, constructive and conscious media reportage.

Buratai commended the collaboration of sister services and other security agencies, and called for more support and collaboration towards making the country safe for all.

He thanked President Muhammadu Buhari and the Borno State Governor, Prof. Babagana Zulum for their support towards defeating terrorism and ensuring peace and stability in the north east.