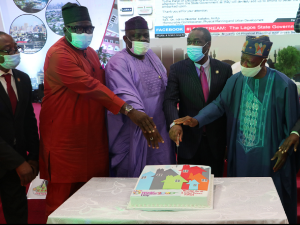 Sanwo-Olu made this known at the year 2020 World Habitat Day on Monday in Alausa, Lagos with the theme: “Housing For All: A Better Urban Future”.

The governor said his administration was committed to increasing the total housing stock in the State by 3004 units with the completion and delivery of additional seven housing schemes comprising 2,268 units by the end of the year.

Sanwo-Olu, who was represented by the deputy governor, Dr Obafemi Hamzat, added that his administration was committed to full implementation of the rent-to-own policy.

According to him, this is aimed at achieving the objective of making housing affordable and accessible to low income Lagosians.

He disclosed that within the last 16 months, his administration had completed and commissioned a number of housing schemes including Lateef Kayode Housing Estate, Igando, Courtland Villas, Lekki and Lekki Apartments, Ikate Elegushi.

The governor added that 303 Lagosians had become homeowners in Oba Adeboruwa, Lateef Jakande and Epe Housing Schemes under the policy.

“Despite the dwindling resources which have assumed a global dimension as a result of the COVID-19 pandemic, we remain committed to making befitting accommodation available to Lagosians.

“The government will achieve this through pragmatic models through the incorporation of private sector partnership and encouragement of local contents while also cutting costs and creating employment,” he said.

Sanwo-Olu urged Lagosians to take full advantage of the grand opportunities provided by the housing programme of the state government.

He said that steps had been taken to remove bottlenecks associated with housing delivery in the State by embracing the mortgage option to home ownership.

“I seek the cooperation of all Lagosians toward the achievement of the Lagos of our dreams, a livable and sustainable city where everyone fulfills their legitimate aspirations irrespective of class, race or creed.

“The thrust of this year’s celebration is a major policy objective of the fourth pillar of our administration’s T.H.E.M.E.S agenda which is “Making Lagos a 21st Century Economy”.

“The current and projected future population of our State presents huge opportunities for investors in the housing sector and a compelling need for urban renewal,” Sanwo-Olu explained.

The governor added that to achieve one of the THEMES Agenda, the state had returned to the National Housing Fund and appointed the Lagos Building Investment Company (LBIC), PLC as the sole mortgage provider to facilitate a reduction in the housing deficit in Lagos State.

According to him, concrete steps have been taken to increase the housing stock in the State through combined efforts of the Ministry of Housing, the Lagos State Property Development Corporation and Lagos Building Investment Company in delivering affordable housing units to the teeming population.

In his address of welcome, the Commissioner for Physical Planning and Urban Development, Mr Idris Salako, said that the state government has a clear understanding and remarkable acceptance of the multidimensional and complex nature of housing in its physical, social, economic, cultural, political, psychological and technical identities.

Salako said that government was matching up to its successful delivery of housing in cost-efficient, pragmatic and innovative manner.

He added that the state government had evolved, institutionalised and implemented specific policy reforms and initiatives that would continue to facilitate the achievement of the “Making Cities and Human settlements inclusive, safe, resilient and sustainable”.

The commissioner noted that the state was working assiduously to ensure housing for all Lagosians within the ambits of globally-accepted standards.

He said, “While persistent population increase and inadequate shelter have been of major concern to our state, the administration has made relentless efforts at ensuring housing for all by strengthening the enabling legal institutional framework.

The Guest Speaker, Dr Tunde Reis, urged the government to come up with innovative policies that would drive the housing Industry.

Reis said that apart from existing policy on building, regulation for managing the community should be imbibed.

He noted that sustainable relationship between the government and private organisations should be developed adding that there was no country in the world that government alone could solve its housing problems.