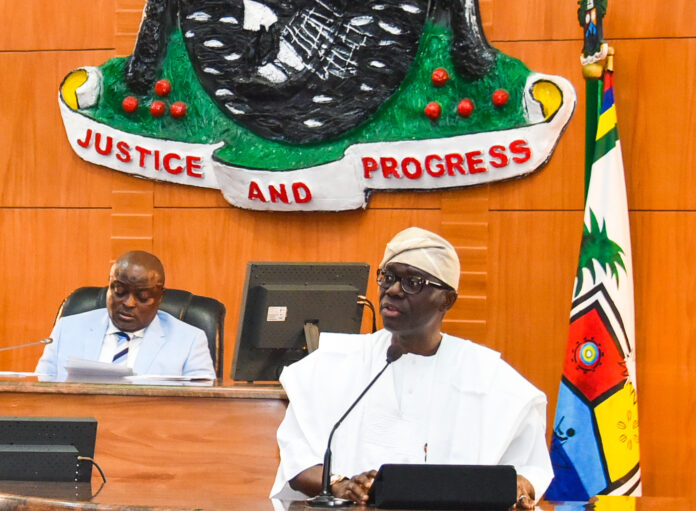 Ikeja, Oct. 5, 2020 Members of the Lagos State House of Assembly on Monday passed a resolution urging President Muhammadu Buhari to address the issues of poverty, unemployment, inflation and underdevelopment.

The House made the resolutions through voice votes made under Matter of Urgent Public Importance, moved by the House Deputy Majority Leader, Noheem Adams, during the plenary in Lagos.

The lawmakers, who took turns to speak on the nation’s 60th independence anniversary, also urged the president to continue to work for the unity of the country.

They also commended Buhari, members of the National Assembly, all democrats in Nigeria; both progressives and conservatives, especially Asiwaju Bola Tinubu, for their roles in the development of the country over the years.

In his contributions, the Speaker of the House, Mudashiru Obasa, said leaders should focus more on the problems and see where they had gone wrong.

Obasa said they should rather focus on how they could address the issue of poverty, unemployment, inflation, lack of qualitative education, ethnic division, Oodua, Biafra, Arewa and the people of Niger Delta that were making agitations.

“Our federalism is more of a unitary government, so we must be careful.

“We should continue to talk until we get there. We should address the issue of poverty, and inflation,” he said.

Also, the Deputy Speaker, Wasiu Eshinlokun-Sanni, said people should think more of Nigeria than thinking of its division, pointing out that the current development was not what the people desired.

Eshinlokun-Sanni said: “All the politics of Nigeria started in Lagos with people like the late Herbert Macaulay before people like late Chief Obafemi Awolowo joined.

“Nigeria was formed by Northern and Southern Protectorates as well as the Colony of Lagos.

“Nigeria is not developing the way we want, because we the elites did not galvanise the development the way we should.

“We should develop our electricity so that we can develop industrially and help our small scale industries. We should congratulate Nigeria and see that we can do better.”

Moving the motion, Adams, representing Eti-Osa I, recalled that Nigeria actually got independence on Oct. 1, 1960.

He said going down memory lane, it was on Oct. 1900 that the Northern and Southern Protectorates were created and in 1914, the northern and southern protectorate were amalgamated.

“The Motion for the independence of Nigeria was moved in 1953 by Pa Anthony Enahoro.

“We got independence in 1960, but we have had issues such as the civil war, economic challenges, among others.

“Since independence, the issue of national unity has always been the problem.

“The issue of economic development has been a problem, and we have been depending on oil and attention has not been on industrialisation.

“Lagos has always been at the forefront of development for the country, so the state needs to be given a special status,” he said.

Also, Rotimi Olowo (Shomolu I), said infrastructure and economy of Nigeria were not in good condition, saying that the government needed to look for alternatives such as agriculture.

Olowo said the leadership in the country needed to reverse their ways of life, adding that their appetite for foreign goods was reducing the value of naira.

Another lawmaker, Victor Akande (Ojo I), said that they should thank God for the opportunity to be in Nigeria and be Nigerians, and everybody should be called upon to rise up to the occasion based on the national anthem.

“In the past, we used to depend on agriculture and our money exchange for two pounds, but it is in shambles now.

“We need to wake up from our slumbers and go back to what we used to do,” he said.

In his comments, Rasheed Makinde (Ifako Ijaiye II), said that the formation of Nigeria had been faulty since independence.

He said that Nigeria could not get to the Promised Land with its present Constitution, which he said, gave room for financial recklessness.

Also, Setonji David, representing Badagry II, said that Nigeria used to be ahead of other countries such as Malaysia and Indonesia.

David said that the nation was making progress, but that its systems caused stagnation.

“There is so much injustice in Nigeria, which is why people are calling for another constitutional conference.

“We have federal character, which promotes indolence as merit has been relegated to the background,” he said.

In his comments, Lukmon Olumoh (Ajeromi/Ifelodun I), said that Nigeria had several diverse tribes, and they needed to defend their unity.

Olumoh said Nigerians should celebrate their democracy as they had uninterrupted civilian government since 1999.

Mr Abiodun Tobun (Epe II) said 60 years was worth celebrating, noting that the country has problems of leadership, corruption, religion and ethnic dichotomy.

“The Constitution of the country is also not okay.

“I feel that we need a country, where each state would control its resources and have its laws as it is done in the United States of America to make the federal less attractive.

“When each state is allowed to develop on its own, based on comparative advantage, it would be better.

“We also need good leaders, and we know a man that can make Nigeria better based on what he did in Lagos State,” he said.