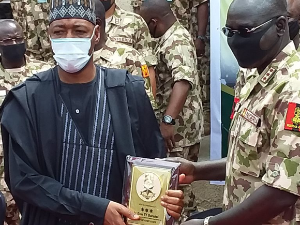 Maiduguri, Oct. 6, 2020 Gov. Babagana Zulum of Borno, on Tuesday, lauded the military for collaborating with the state government to return Internally Displaced Persons (IDPs) back to their ancestral homes.

Zulum made the commendation while declaring open the Chief of Army Staff Combined Conference in Maiduguri.

According to the governor, the successes recorded by ‘Operation Lafiya Dole’ has brought about relative peace in the state and aided in the safe return of the IDPs.

The governor pledged his administration’s continued support to military operations in the state through the provision of all the needed moral and material resources.

Zulum however stressed the need for the military to intensify onslaught agaist the insurgents for a final end to the crisis.

“I want you to change the war narrative all together, to finish the crisis.

“Attack, they said, is the best form of defence. The Nigerian Army must therefore take the war to all the hideouts of the boko haram insurgents and should not wait and give the insurgents the opportunity of attacking first.

“The Nigerian Army must also embark on confidence building and confidence sharing mechanism, with communities and civil authorities, so as to expose the terrorists, their collaborators and sponsors, ” Zulum said.

He also urged the army to use the occassion of the Chief of Army Staff conference to look back on the challenges, successes and what is needed to be done to win the war.

While lamenting on the recent deaths of some officers and men in the fight against insurgency, Zulum consoled the army and their families for the losses, adding that the gallant soldiers must not die in vain.