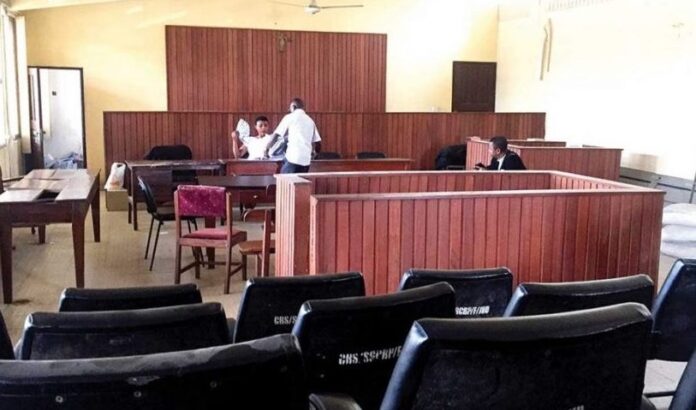 James Ejeh and Simon Abraham, are accused of robbing Ms Christy Maker on the Airport Road, Abuja on Jan. 17, 2017.

The police charged Ejeh and Abraham with two counts of conspiracy and armed robbery.

Kekemeke fixed the date after the Prosecution Counsel, Kufreabasi Ebong, closed his case.

The prosecution called four witnesses to make their case against the defendants.

The fourth witness, ASP Matthias Auta’s evidence was opposed by the defendants counsel on the grounds that the defendants were forced to make the statements sought to tender.

The court then ordered for trial -within- trial.

Ruling on that, Kekemeke held that the prosecution had made out a case against the defendants and ordered that the trial should continue.

The prosecution fourth witness, (PW4) Auta in his evidence when led by Ebong told the court that at his initial investigation, he discovered that the defendants were policemen.

He added that they attacked and robbed one Christy Maker of her belongings, Mazda 626 and other things which were recovered from the possession of the first defendant.

Auta told the court that the property was released to her on bond while the ammunition recovered was tendered in court as exhibit.

Counsel for the the first defendant(Ejeh ) Prof. Agbo Madaki told the court that he doesn't have any questions for cross examination of PW4.

Mr Ocheme Adama for 2nd defendant however asked the witness if he really investigated the matter, he answered yes.

The witness said he investigated the matter and that it was what the complainant told him.

When asked if he found any of the exhibit with the second defendant, he said yes, the AK47 used for the robbery.

The witness alleged that the vehicle the defendants used in the robbery was abandoned on the scene through which they were arrested.