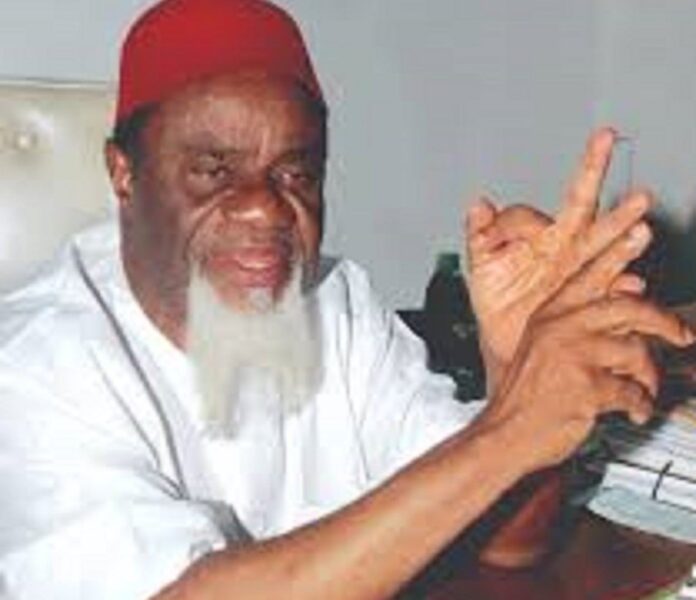 By Francis Onyeukwu
Awka, Oct. 5, 2020 Former Gov. Chukwuemeka Ezeife of Anambra has said that the people of South-East geo-political zone will go on their knees to beg other zones, if it becomes the condition to actualise their ambition to produce the next president in 2023.

Ezeife said this on Monday in Awka during the launch of Global Movement for President of Igbo extraction in 2023.

The project, which was initiated by one Kennedy Iyere, is to ensure an Igbo man emerges the next president of Nigeria.

The former governor regretted that southeast remained the only zone to produce a president since the return of democratic rule in Nigeria.

He appealed to other geopolital zones to support the clamour for a president from the southeast in 2023 for fairness, equity and justice.

“We are using this medium to call on people like Alhaji Bola Tinubu and others from the north nursing the presidential ambition to have a rethink,” Ezeife said.

The Chairman of the event, Sen. Ben Obi, urged Igbo people to unite to fight the course, saying that power is not given but struggled for.

Obi listed four hurdles that the people must cross to achieve the desired result.
He said that the political class from the zone must speak with one voice and persuade political parties to allot the presidential slot to the area.

A former Minister of Women Affairs, Mrs Josephine Anineh, said that it was imperative for other zones to support the agitation by the southeast to produce the next president.

According to her, any person that is opposed to the zone producing the next president in 2023 does not wish Nigeria well.

The Convener of the summit, Mr Kennedy Iyere, said though he came from Edo, he decided to champion the course for equity and political stability of the nation.

Iyere said that the group would attract national and global interest to achieve the project.

Other prominent Igbo personalities at the event were former Minister of Aviation, Dr Kema Chikwe, and governorship aspirant in 2021 poll in Anambra, Chief Goodwin Ezemo, amongst others.