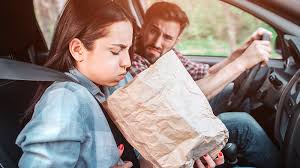 A new study has found that motion sickness can be reduced through visuospatial training, which involves a person manipulating 3D objects in their imagination.

The study, published in the journal Applied Ergonomics, may be particularly valuable given the growing trend toward developing autonomous vehicles, which could induce motion sickness, particularly if a person is engaged in other activities while riding.

Motion sickness can occur in various vehicles, such as cars, buses, trains, airplanes, boats, and theme park rides, and it can also develop while using virtual reality headsets.

In addition to nausea and vomiting, a person with motion sickness may also experience sweating, dizziness, hyperventilation, headaches, restlessness, and drowsiness.

It is not clear what causes motion sickness, but the issue may involve discrepancies among various areas that sense motion — for example, between the inner ear and the visual stimuli that the brain processes.

Doctors often recommend behavioural changes — for example, sitting in the middle of the bus or keeping the eyes fixed on the horizon. Some medications can also help, though they typically make people drowsy.

The researchers who conducted the present study wanted to find more effective ways of reducing motion sickness that did not cause side effects.

They noted that previous research had identified a possible link between motion sickness and visuospatial aptitude, though the precise nature of this link was not clear.

The team found more clues in research exploring the relationship between visuospatial performance and a person’s sex.

This research suggested that males tend to have better visuospatial abilities than females. Previous research has also indicated that females tend to experience motion sickness more than males.

Over 50% reduction in motion sickness

The team then gave the participants pen-and-paper visuospatial training activities to complete for 15 minutes a day over 14 days. These involved activities such as viewing a 3D shape and correctly identifying which of a number of reoriented shapes had been the original shape, as well as paper folding tasks and analyses of spatial patterns.

At the end of this period, the participants again took part in either simulated or on-road driving trials, during which the researchers assessed their motion sickness.

The team found that the participants’ motion sickness had reduced by an average of 51% in the simulated trials and 58% in the on-road trials.

For Joseph Smyth, a research fellow at the University of Warwick, in the United Kingdom, and the corresponding author of the study, “Being able to reduce an individual’s personal susceptibility to motion sickness using simple ‘brain training style’ tasks training is a massive step forward in the development of future transport systems, including autonomous vehicles.”

“Human factors research is all about how we can design products and services that are pleasurable. Motion sickness has, for a long time, been a significant limitation to many people’s transport options, and this research has shown a new method for how we can address this,” he adds.

“I hope that in the future we can optimise the training into a short, highly impactful method. Imagine if when someone is waiting for a test-drive in a new autonomous vehicle they could sit in the showroom and do some ‘brain training puzzles’ on a tablet before going out in the car, therefore reducing their risk of sickness. It’s also very likely [that] this method can be used in other domains such as seasickness for Navy staff or cruise passengers. [And] we are particularly excited about applying this new finding to virtual reality headset use.”