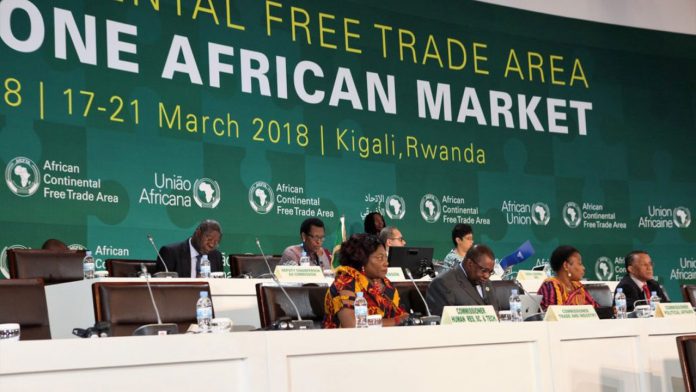 By Emmanuella Anokam
Abuja, The Nigerian Office for Trade Negotiations (NOTN), says the postponement of the commencement of African Continental Free Trade Area (AfCFTA) will afford Nigeria the opportunity to ratify the agreement.

Mr Victor Liman, the Acting Chief Trade Negotiator and Director-General, NOTN made this known in an interview with the News Agency of Nigeria (NAN) on Tuesday in Abuja.

Naija247news recalls that AfCFTA implementation was expected to commence on July 1, but was disrupted because of the COVID-19 pandemic, thereby, causing both positive and negative implications for Nigeria and Africa as a whole.

Liman said the postponement gave Nigeria sufficient time to ratify the AfCFTA agreement, which it signed in 2019 and deposited the same instrument of ratification with the Chairperson of the AU Commission in accordance with Articles 23 and 24 of the agreement.

He said this applied to the remaining 23 signatory African countries that were yet to ratify the agreement.

“Doing so will enhance the opportunity given by the postponement for African countries to further discuss the modalities and agree on the best strategy for the removal of physical trade and non-tariff barriers to trade.

“On the other hand, in as much as the postponed period presents an opportunity for Nigeria and other signatory states to ratify the agreement, it can also result in a relunctance to ratify, thereby delaying the speed of further negotiations on trade,” he said.

Liman said that from all indications with the reduction in government revenue across Africa, including Nigeria, postponing the commencement of free trade was a matter of economic and fiscal exigency.

“As member states can continuing levying tariffs and retain the needed revenue for healthcare, social intervention and debt servicing,” he said.

Liman stressed the need to strengthen and develop local manufacturing and service delivery capacity as reports and trends during the lockdown showed the stability in essential goods and services trade.

He said this could be further scaled up by making and implementing robust trade policies and provide the needed stimulus packages, palliatives and tax incentives.

Liman said that critical infrastructure had been identified as a non-tariff barrier to the success of the AfCFTA.

He said the postponement gave countries with inadequate critical infrastructure to make the right investment to induce the growth and development of such infrastructure.

According to him, it will further delay the activation of intra-African trade and may likely encourage the continuance of the trade patterns as usual with other non-African trading partners.

The main objectives of AfCFTA are to create a single continental market for goods and services with free movement of people and capital, and pave the way for creating a Customs Union.

It will also grow intra-African trade through better harmonisation and coordination of trade liberalisation across the continent.

Naija247news recalls that Nigeria became the 53rd country to join the AfCFTA after President Muhammadu Buhari signed the AfCFTA Agreement on July 7, 2019 in Niamey, Niger Republic at the African Union 12th extraordinary summit.