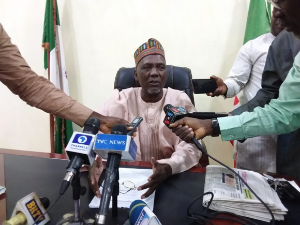 By Yakubu Uba
Maiduguri, Sept. 7, 2020 The Chairman of Borno Geographic Information Service (BOGIS), Bashir Shettima, has said that about 80 per cent of landed properties in Maiduguri, the state capital, have no legal titles.

Shettima disclosed this on Monday in Maiduguri while briefing newsmen on efforts to address the situation by the agency.

“75 to 80 per cent of landed properties in Maiduguri are held exra judiciary; they don’t have legal titles, what they have is just agreement from Village or District heads.

“That’s why many of our people, particularly businessmen, cannot access any loan because such agreements are not titles or Certificates of Occupancy considered as collateral by banks.

“Many beautiful Federal Government programmes like industrial and agricultural loan schemes would be hard to get by the people,” Shettima said.

He noted that many plots issued to some people by Northern Nigeria and North Eastern Nigeria governments were neither developed nor regranted as provided by law.

Shettima added that the validity of such grants, especially land for commercial purposes whose tenure is 40 years, had since expired.

He explained that the government was not out to take over such land as being speculated, but to encourage people to come foward and register their land and be given title document as well as pay their ground rent.

The chairman said that BOGIS had already held meetings with stakeholders like lawyers, land vendors and members of Borno Chambers of Commerce to explain the situation.

Shettima said the public needed to know that whoever bought land or house from another person need to come for change of ownership.

He also said that for those given land who wanted to sell or transfer to another persons, they must apply for consent of the state Governor, in line with the Land Use Act.

The chairman said BOGIS had already commenced documentation of title holders in areas like GRA, Polo, Damboa road, Lagos street and former Assembly Quaters in Maiduguri metropolis under it phase I of the exercise.

Shettima said the residents were given three months to come for documentation, failure which government would take the next line of action which might not be palatable.

He said that BOGIS was mandated by Gov. Babagana Zulum to create a data base for the state, showing all infrastructure, for government agencies and private sector interested about the potential of the state to access.