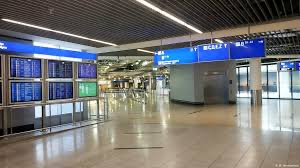 Frankfurt, Aug. 24, 2020 (dpa/Naija247news) The number of passengers passing through Germany’s airports on Monday remained just a fraction of pre-pandemic levels five months after the coronavirus brought international air travel to a near stand-still.

According to the figures released by the German Airports Association (ADV), the height of Germany’s holiday season, German airports served just fewer than 4.9 million passengers, around a fifth of the number seen in same month in 2019.

Intercontinental passenger flights were hardest hit, with passenger numbers plummeting 93.5 per cent year-on-year in the face of the German government’s continued travel warnings for much of the world.

Passenger numbers on flights to European destinations, where government guidelines on travel are for the most part more relaxed, were still down 76.8 per cent compared with July.

The number of people taking domestic flights within Germany, meanwhile, plummeted by 80.2 per cent.

However, after the first seven months of 2020, including the first two pre-pandemic months, German airports served 44.7 million passengers, 68.5 per cent fewer than same period in 2020.

Overall, commercial aircraft movements/the number of times aircraft transporting passengers or cargo took-off or landed at German airports, fell by 55.6 per cent in the first seven months of 2020.