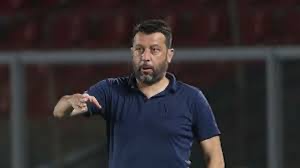 Parma (Italy), Aug. 23, 2020 (Reuters/Naija247news) Parma have dismissed coach Roberto d’Aversa, three weeks after the end of the season, the Italian Serie A club announced on Sunday.

D’Aversa, 45, took charge of Parma when they were in the third-tier Lega Pro in 2016 and earned consecutive promotions to restore the club to the Serie A.

“Parma announce that Roberto D’Aversa has been relieved of his role of first team coach,” the club said in a statement.

“This is a result of the fact that over the last few weeks, the cohesion, unity of intent, harmony and mutual enthusiasm which have been so key to the successes achieved together over the last few years have disappeared.”

Parma, who were relegated to fourth division in 2015 after being declared bankrupt, finished 11th in the Serie A last season after being 14th in their first season back in the top division.